Church breakdown about ten years ago.  I was using a carpet sweeper and chatting with the pastor. If I recall correctly, we were talking about Lorna Doone and how I loved hating Carver.  That’s when I said it.

“The best thing about fiction is that it’s not a sin to hate the bad guy.”

I totally cracked him up.  And when he realized I was serious… he laughed even harder.

But it’s true. There’s a certain catharsis in despising characters like Captain Hook and Jadis, The Queen of Hearts and Eustace Clarence Scrubb. I also take great satisfaction in seeing someone like Eustace change at the end.  We like that, too.

But of all the characters I loved to hate, Nellie Oleson probably tops the list.  Self-centered, snotty, rude, unkind… and best of all, though we didn’t know it as kids, an overachiever.

You see, Nellie wasn’t just two-faced. She was three-faced! 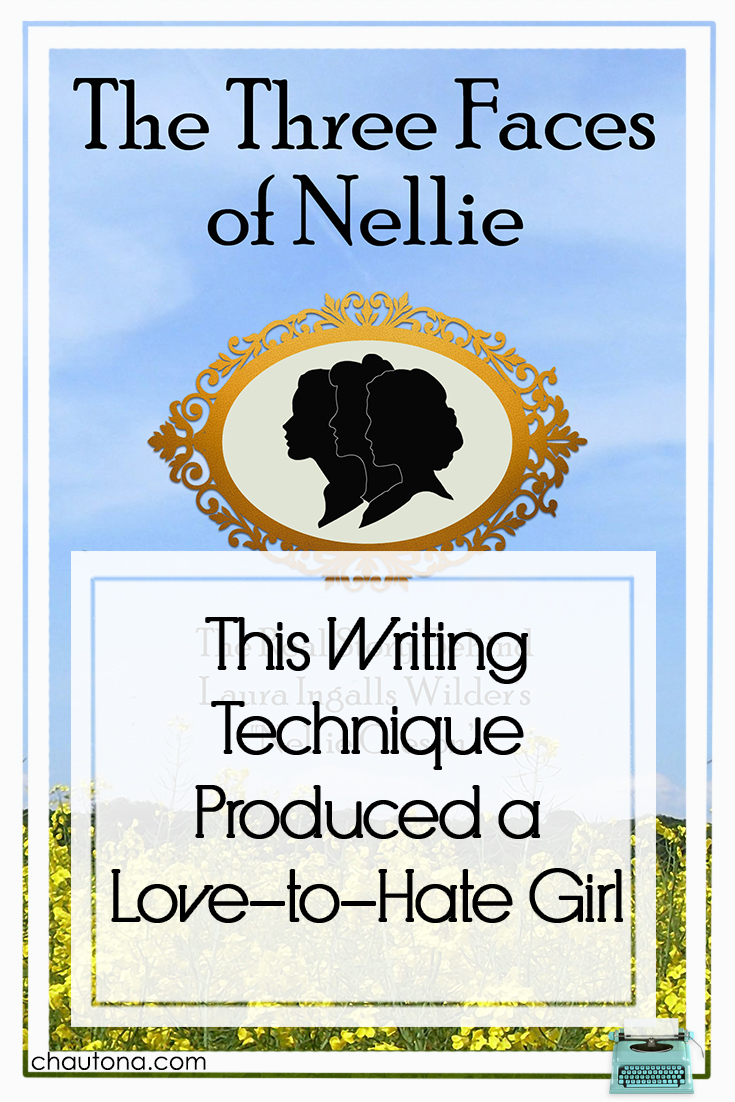 I noticed it first in the Anne of Green Gables movies.  Several characters from the books ended up combined into one in the movies.  It reduced the number of necessary characters while still showing personalities and events that people would enjoy and recognize.  I’ve seen it used in other book-to-movie situations since.

But one of the first instances of it that I ever read was Nellie Oleson. As a girl, I loved the books—read them all.  As an adult, I reread them and other books that told about the Iowa years, what happened after Almanzo’s stroke, about their life in Missouri.  In one of those books, I learned that Nellie Oleson didn’t actually exist.  She was a combination of three girls who had antagonized Laura’s child and girlhood.

In The Three Faces of Nellie, we learn about the girls who gave us someone we loved to hate. Except that since she’s based on real people and events, I don’t think it’s right to let myself hate her.  Drat.  Just kidding.

This isn’t a storybook.

If you expected a compelling narrative depicting the lives of these three girls, you may be disappointed in the book.  This book was obviously written by and for people who are fascinated with the life of Laura Ingalls Wilder.

Through meticulous research, Robynne Elizabeth Miller peels away the ambiguity surrounding these girls and lets us see who they were and why Laura Ingalls so disliked them.

One of the things I loved most about the book was reading the actual accounts of things I’d read as a story in the series.  So many are almost indistinguishable from the versions I’d read as a girl, while others are very similar but with different motives, or in the case of Nellie, people.

There has been some criticism of the dry factual nature of the book, and it’s valid—if you expected a story.  I didn’t.  I expected research on these people, and I got it.

Where my criticism lies is that there was actually more about the three Nellies’ families (parents and children) than there was about them.

Still, I think any LHOTP lover will find the book fascinating.

It may not be one of those books that you read straight through on a Sunday afternoon, but it was fascinating to see both the information Ms. Miller discovered about each of these ladies and the research process she must have gone through to discover it all.

Recommended for genealogy buffs and Ingalls aficionados, The Three Faces of Nellie will never win awards for its riveting narrative, but it will keep you digging to know more about Willie (Owens) Oleson, about potential land fraud, and more!

Previous Post: « When This Life Denies You Coffee, Wait 10 Years
Next Post: If You Want to Make Genuine Connections, Use Words »