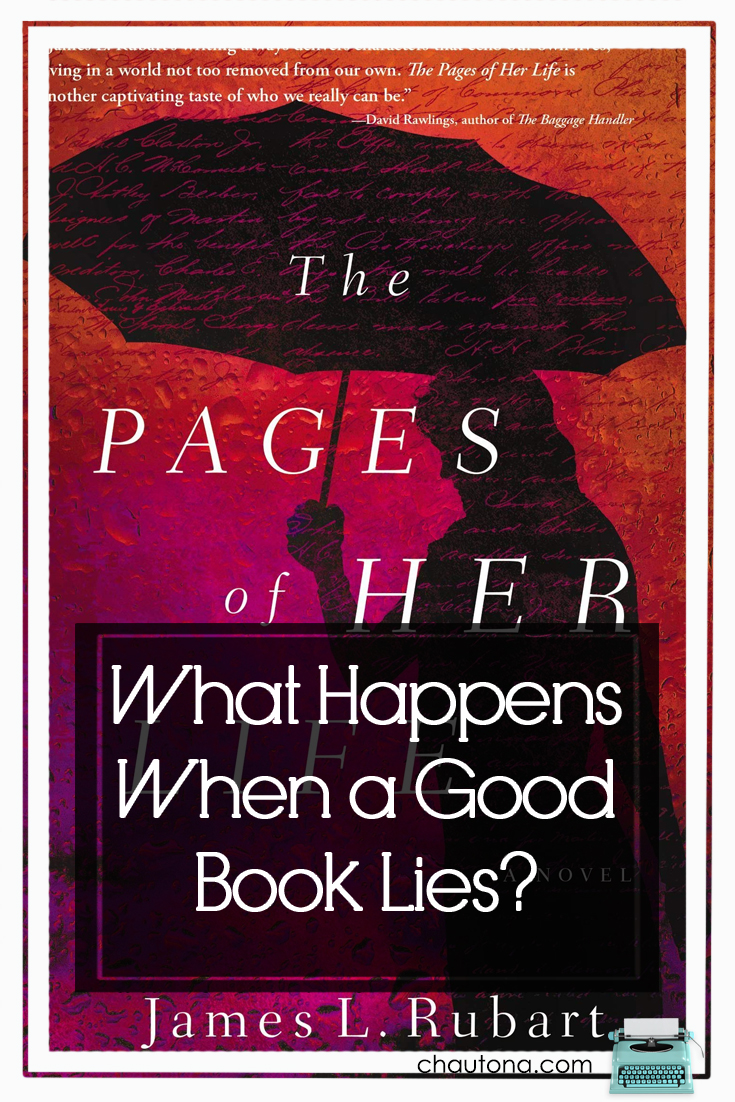 Hand-tooled, floppy leather. A bejeweled button closure.  If you opened it, hand-sewn blank pages emerged—pages that begged for a story to be written within.  It arrived in a Priority mail box—part of a Christmas gift swap.

As things often do, it gave me the idea for a story.  A man would find that journal someday—just tucked away among the shelves of a second-hand bookstore, and within its pages, he’d find a story so beautiful that he’d be compelled to return it to the owner.  What happened then… well, that’s a story for another day.

Still, once I conceived that idea, I began looking for books that included journals in them.  I wanted every bit of inspiration I could get, and I wanted to ensure that I kept this idea different.  Something special.

So… when I saw The Pages of Her Life by James L. Rubart available for review, and I read the synopsis, and it included a mysterious journal… well…

Okay, so I’ve also really been wanting to read a book by Jim Rubart for a LONG time, too. Justification to do what I want and a book about a journal? Win-win, right?

I dove in this morning at about five o’clock. I spent the last five hours reading and ruminating over the book, and I have more questions than answers on how I feel about it.

Note: links are likely affiliate links that provide me with a small commission at no extra expense to you. Additionally, I requested a review copy of the book and was provided one.

What Happens When a Good Book Lies?

It took me ages to figure out the title of this review. Once I did, I hated it—the title, I mean. Because you see, it says it all right there.

The Pages of Her Life is, in many ways, a really good book.

As a writer, Rubart knows how to wrangle words in such a way as to, in the words of James Michener, “tangle with human emotions.” He has a keen insight into humans—into the souls of people. And, he’s not afraid to probe into those souls and lay them bare for us to learn from.

Page by page, he peels back the layers of each character—even the minor ones and shows us what we need to see in ourselves. Through the wise and foolish decisions of his characters, we see where our own thoughts and actions hurt or heal us—teach or deceive us.

Even better, most of this he does through foreshadowing and subtext. This adds richness and depth to his work. It also avoids that little thing I love to hate—preachiness.

Then there are the villains.

Make no mistake about it. I consider these folks villains. When people manipulate, lie, cheat, gaslight, and all in the name of “God told me…” I won’t allow myself to get all preachy right there, but man I want to. Just sayin’. But when that happens. #villains.

Look, I was so disgusted with these people that I actually didn’t get hot under the collar with Rubart when he had one of his characters use religion/religious like it was a four-letter word. And that’s kind of a pet peeve of mine.

So with all that, what’s with the lies, you ask?

Actually, that’s what I want to ask. Why did Jim Rubart put unBiblical statements in The Pages of Her Life about Allison’s and her brother’s “moments” if you will? Those times when they finally figured out what it was all about. Why did he say that the answers were within themselves instead of from the Lord? Why did a messenger from the Lord point them to something within instead of to the Word of God?

Here’s the thing. I don’t know if the lie is meant to be one. I don’t know if Mr. Rubart had any idea of what he’d created when he did this. Because you see, I suspect that my problem with this book is the result of him being too clever for his own good.

Before I go further, I need to point out something.

I recognize that I might just want to like this book so much more than I do that I’m grasping here. However, I don’t think so.

I think that The Pages of Her Life does have a serious problem, and that problem is that some elements are too subtle. I object to the statements that imply this is all about what is innately within Allison because she’s a “warrior princess” or that who her brother really is deep within was “always there.” On the surface, those are just so unBiblical on so many levels, and I expect a Christian author writing under a major Christian publishing imprint to present Biblical truth.

This is where I think he went “too clever.” I suspect that all along, Rubart pointed to Jesus within Allison—to the Holy Spirit. The only thing that makes sense, especially in light of how Mr. Rubart wrote the rest of this book, is that the one character who keeps pointing everyone to (bad paraphrase here, but work with me) “look within” was really saying to look at Who indwells him/her.

Certain things point to this. Even Allison’s childhood references to being a “warrior princess” fits who she is in Christ. We are warriors, fighting a spiritual battle. And as a daughter of the King of Kings, well, she is a princess.

I just wish it wasn’t quite so subtle if that’s what he’s doing.

Yes, I recognize the irony in the woman who always complains about too much on-the-nose preachiness in books now complaining about too much subtlety.  This time, however, I think I have a valid argument.

Because taken at face value, I couldn’t recommend the book except to the strongest, most grounded of Christians—and even then, it’s tough.

Yes, I love what I think he tried to do with the book—with almost every element of The Pages of Her Life. But when we get to the great reveal, what could be brilliant, could also be heretical.

And then what do you do with that?

Instead, I’m sitting here faced with not knowing how to rate this book on Amazon or Goodreads. I don’t know if it’s a brilliant 5-star book that I love, or if I hate it, and the reason is I don’t know what Mr. Rubart meant by those words.

I also don’t know if everyone else gets it but me, and I’m just not sufficiently intelligent to see that, duh, of course, this is what he was doing, or if it really is as subtle and overly-clever as it seems.

For now, I leave you with this.

If you read The Pages of Her Life, I recommend you read it with the lens of truth. Allison claims Jesus as Lord of her life. Because of it, any reference to who she really is, looking within, or any of that other stuff that we usually hear in the accent of modern psychology, read it with the filter of the Gospel, recognizing who she’s supposed to be in Christ.

I think it’ll make all the difference.

Previous Post: « Will I Read the Rest of This Unique New Series?
Next Post: 3 Reasons You’ll Love and Hate This Book »