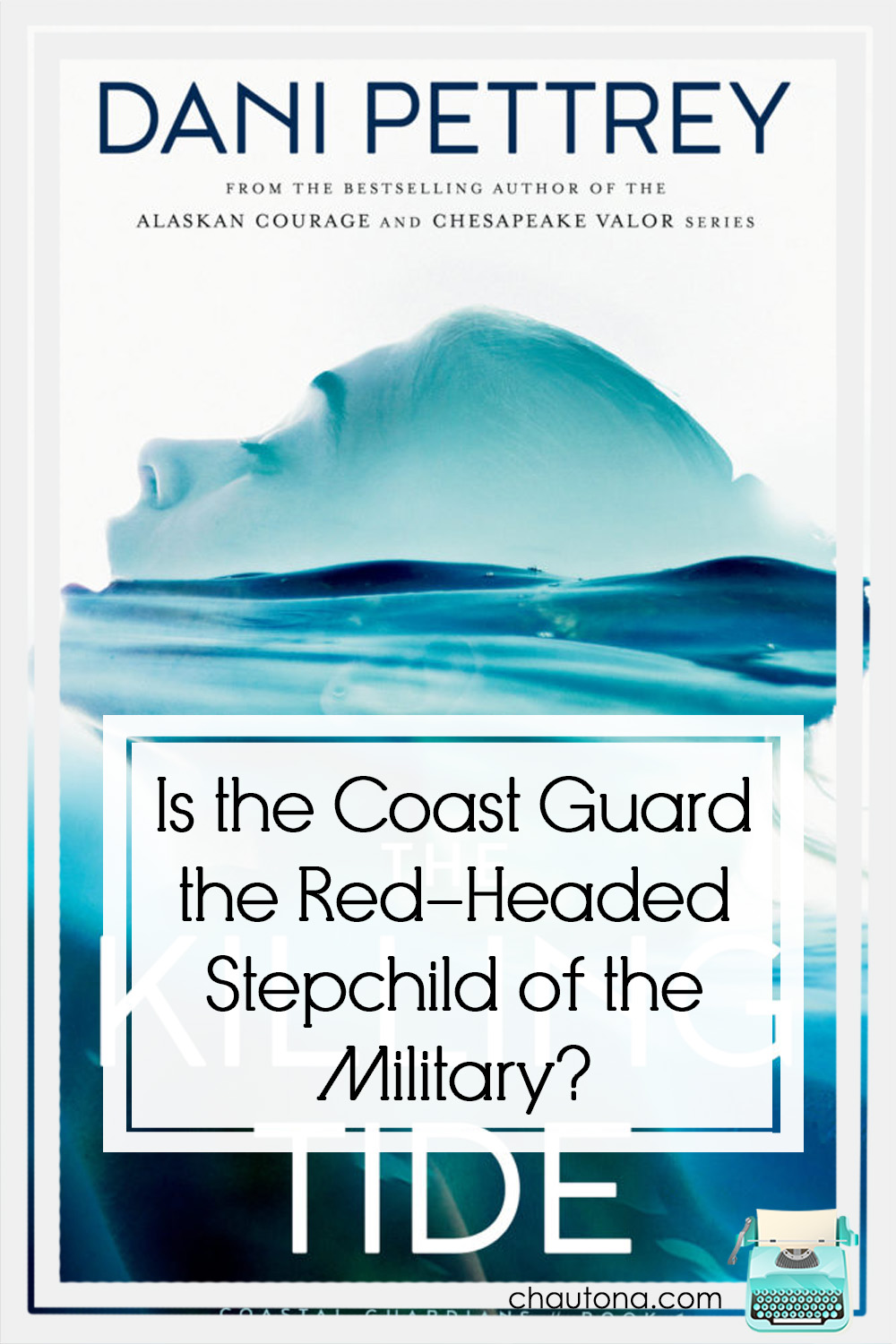 I know where I was the day I learned about the Coast Guard, although I don’t actually know how old I was.  Dad was driving me to school along Olivas Park Drive.  Just after we passed the Olivas Adobe, whatever he was saying clicked.  Something about having an honorable discharge… from the Coast Guard. As far as I knew to that point, we had four branches of military, but if what Dad was saying was what I thought he said… We had five?  Really?

You know, to this day, I hear people talking about the military… and rarely do I ever hear the Coast Guard mentioned.

Of course, when Dani Pettrey’s book, The Killing Tide became available for review, I was ready just because of her name and that gorgeous cover.  When I learned that the book was the first in the series about the Coast Guard, well… I had to request a copy, didn’t I?

And when my mom read it and said, “Yeah.  That one was good,” I couldn’t wait to read it.  I had one question in mind…

Is the Coast Guard the Redheaded Stepchild of the Military?

You’d think so with the way it’s often overlooked in books about our military forces, but Dani Pettrey plunges us into a whirlwind of a story featuring both Coast Guard heroes and a dedicated journalist who wields words instead of weapons to keep our country safe. Am I connected with this series?  Will I be reading all the books?  Oh yeah.

Still, I have mixed emotions about this particular book.  It wasn’t the home-run I expected.

The Good, the Bad, and the Confusing on The Killing Tide.

I’ve never read anything by Danni Pettrey before, but man can this woman write.  Seriously, she kept me on the edge of my seat even in parts that weren’t… amazing.  She knows suspense, she knows mystery, and she’s not afraid to write real characters that do real amazing and stupid things.

The settings were stellar; the pacing, off the charts.  By the time I got just a few chapters in, I knew.  This was a series I’d follow all the way through.

This will sound contradictory, but Pettrey wrote some seriously compelling bad guys.  I LOVED hating her bad guys.  I mean, isn’t that one of the benefits of fiction?  It’s not a sin to hate someone who doesn’t exist?  Catharsis, baby!  But then bad guy turns… stupid?  I mean, at the end of the book, all the brilliant bad guy-ness is just conveniently inadequate to the task.  Or, anyway, that’s how it seemed to me.  It felt that rather than the good guys out-smarting the bad guys, the bad guys just got tired and lazy.  How convenient.  As much as I hate saying that, it’s true. Like I said to start off, she wrote COMPELLING BAD GUYS.  I just wished they’d stayed compelling.  It would have meant the “good guy triumph,” had some real teeth to it instead of, “Oh, how convenient. We won.”  That’s how it felt.  🙁

But then there was Gabby.  What did Finn see in her?  What are we supposed to see in her?  Because, frankly, until the very end, there’s almost nothing to like about her. She claims to care about her family and not want them hurt, but then she seriously makes every possible decision she can to ensure they are put in danger.  Her job matters more than the people she claims to love most–and that began before the story began.  You know, back when she dumped Finn for a job.

Look, I don’t mind unlikeable characters.  However, I need a reason for them to be unlikeable, and I really need a reason to change my opinion.  Unfortunately, I just wasn’t given one.  In this book. Maybe throughout the series, that’ll change.  I really hope so.

I was confused in chapter two.  Right off the bat.  We have heroine showing up and… who are all these people?  What connection to the story?  Why do I care about–wait, what just happened?

Mostly, it had to do with lots of people showing up all at once and no idea who they were for pages upon pages.

Seriously, though. If that was all I saw, I might have ignored it.  I mean, it happens.  And sometimes, you just need to get your cast on the page and let them introduce themselves as it fits.  I get that.

However, because of her personality, I’m still confused about what Finn saw in her.  I want to love them together.  I just… don’t.

That said, I am not sorry I requested and received a free review copy, and I am definitely planning to read the rest of the series. I’m just certain it’s going to be great.  As far as this book goes, I enjoyed most of the story.  It’s better than most suspense out there, and I recommend it for readers who love suspense, enjoy military suspense, and like complex characters who don’t fit perfect little boxes.  Danni Pettrey’s The Killing Tide will keep readers glued to the page to find out what comes next, and isn’t that the best part of suspense?