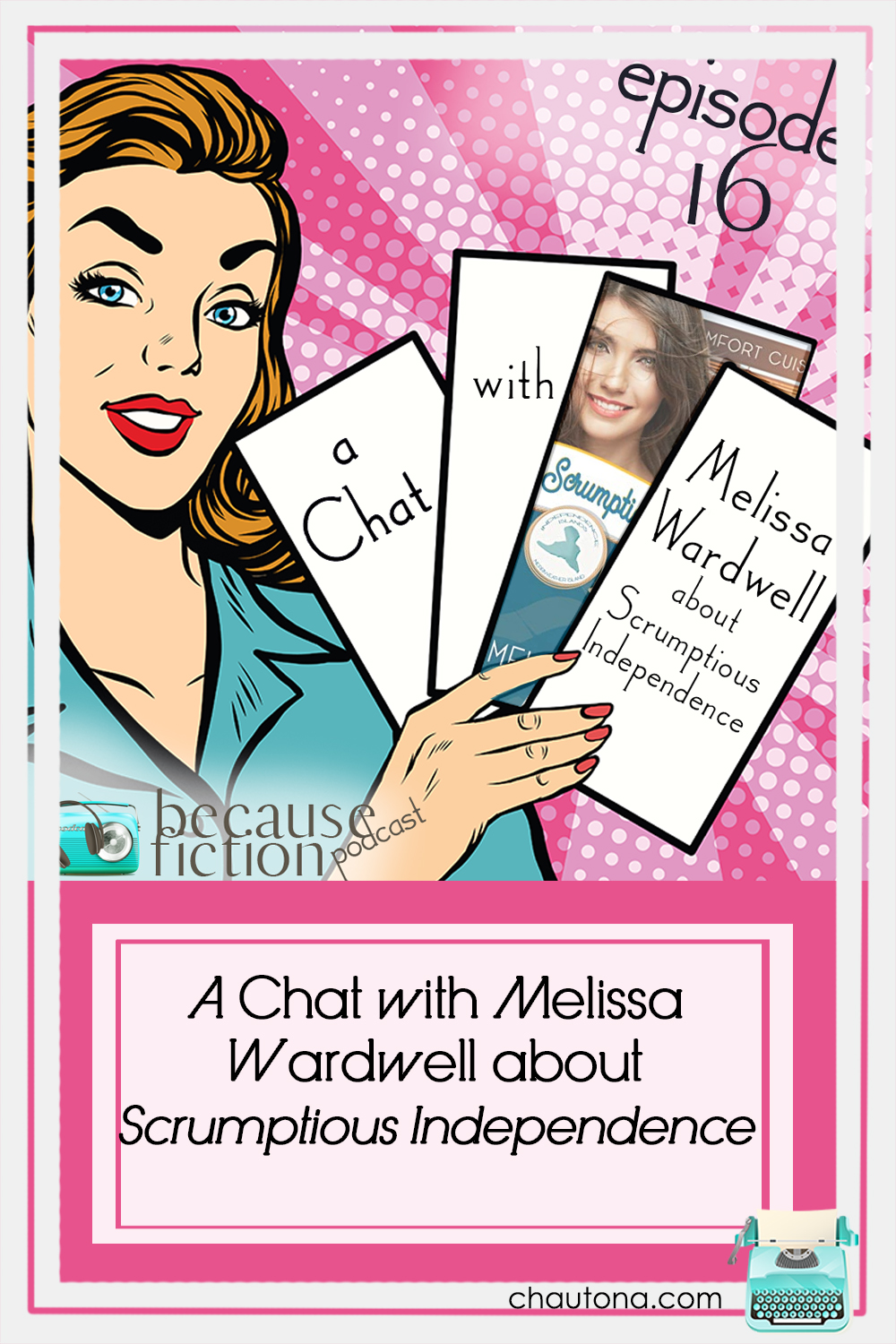 Ever wonder what makes someone start writing? What about where ideas for characters come from? Have you been eager to find out what’s coming in the Independence Islands Series?

Have we got an episode for you!  This week, we’re chatting with author Melissa Wardwell about her author journey, her books, and her inspiration for some of the characters in her first book in the Independence Islands series, Scrumptious Independence.  Not only that, we get a sneak peek into her upcoming books in the series, too!

How the Love of 2 Grandmothers Inspired This Series

Each author in the Independence Islands contributes to the series as a whole, but their books also form an independent series within the series.  Melissa Wardwell ’s series follows Beth Stevens in her quest for independence from familial expectations and utter dependence on God.

In this episode, Melissa Wardwell talks about how both of her grandmothers inspired the character of “Gram” in Scrumptious Independence. Mingling the good food of her childhood with faith, love, and encouragement,

So, thanks, Melissa for sharing all about:

And even more specifically, the upcoming Independence Islands Series.  All of the Merriweather Island books begin releasing, one a month, starting July 28, 2020. All books are up for preorder and for each book you preorder, you can request a collector’s postcard including a map of the island (with special places related to that book marked, and a unique offering from the author—a gardening tip, a list of books to try, or as with Melissa Wardwell’s books, a recipe!  Collect all the cards and receive a special bonus book written just for series superfans!  To find out more and how to get them, go HERE.

Links are likely affiliate links that provide me with a small commission
at no extra expense to you.

All they wanted was a happily-never-after. It was supposed
to be a match made on paper. With him halfway across the globe, they’d
never have to see each other again. So what’s Richard doing back on
Merriweather?”

Armed with an inheritance she never expected and orders on
how to use it, Beth sets off for Merriweather Island and fulfillment of
a lifetime of dreams.

Or so she hopes.”

She met Rafe on the beach when she was just five and it
seemed like fate tied them together. When a chance encounter returns him
to the islands twenty years later, Annie finds her beach friend has
grown up and now needs her help.”

Her Merriweather Hero
by Rachel Skatvold

Falling in love wasn’t in Tyler’s orders, but a new
deployment to Iraq is. How can he convince Kendall not to go AWOL when
she hears? What can he do to convince her that they’ll make it…
together?”

Mishaps Off the Mainland
by Tabitha Bouldin

Everything’s falling apart, and Mel’s dream transforms into
a nightmare. She thought this was what God wanted for her life, but can
you blame her for second-guessing everything?”

Max much prefers the fictional world to the real, and the
gardening girl’s interruptions means he’s driven from his writing cave
far too often for his liking.

How’s he supposed to craft stories with her distracting him all the
time?”

Thanks again to Melissa for being on the show and as one who has read her book, I can assure you that you want to read Beth’s and Scott’s story.  It’s beautiful to see what happens there. 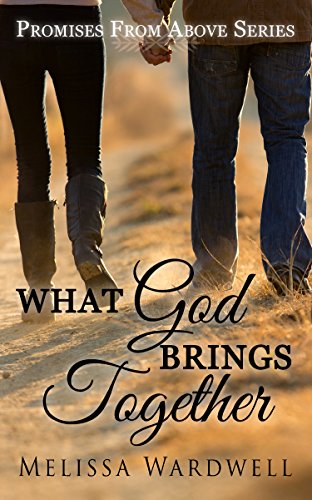 Be sure to check out Melissa Wardwell ‘s book, What God Brings Together.

Can they walk through the doors God opens for them and allow forgiveness to restore what was taken so long ago?

Marriage was forever, at least that was what Emma thought, but an unfortunate turn of events brought her world crashing in around her. Determination to make a good life for her three children spur her to push through the pain of rejection and loneliness she battles. A chance meeting with a disfigured handyman sparks an unusual friendship that turns into more. The only thing holding her back is the memory of her past and what should have been.

His body’s disfigurement and self-torment keep David living in the shadows of society.
After spending time with Emma and her children, he begins to hope for something he knows he doesn’t deserve. Unwilling to listen to the self-doubt, he hatches a plan to put right what was wrong in his life. If only she would let him in.

The Because Fiction Podcast
Taking the pulse of Christian fiction
Episode 22: Unique and Diverse Fiction with Joiya Morrison-Efemini
by Chautona Havig

What’s Better Than a Great Novel? How about THIS?

A novel written in verse. Yeah, I dreaded it. What if I didn’t like it? What if it was—oh, Lord, please no—in free verse. What if it wasn’t and it read like a children’s rhyming book until I wanted to tear out my hair? What if…

The world is full of what-ifs, but one I didn’t have to worry about was “what if I don’t like Joiya Morrison-Efemini’s book, Petrified Flowers. After a couple of swipes of the Kindle page, I was hooked. On the line. Sunk into the depths of a story so rich it wouldn’t let me go.

And here’s where I confess even more.

Yes, the book is written in a hybrid of rhyming and free verse. Yes, I fully expected not to like it. And of course, I was absolutely wrong.

Also in This Episode:

Joiya and I talk about her journey from lawyer to stay-at-home-mom and author, how she got started writing novels in verse, and about her new work-in-progress that isn’t in verse. We get the story behind her three books:

Petrified Flowers is her most recent release, and Joiya talks about how an HBO documentary, Class Divide, that discusses an elite private school in NYC situated directly opposite a housing project. That story stayed with her until she just had to write the story that kept me ignoring my own work. Thanks a lot, Joiya. No, really. I needed a break. Now I’m using the second half as my reward when I finish this book!

I was fascinated to discover that our writing processes look quite similar (and completely opposite).

While she dons running shoes to do her brainstorming, I jump behind the wheel of our car and toodle on down the road. Still, she’s probably much healthier than I am, but I think I’m okay with that.

Seriously, though, we had a great time, laughing and joking. I get this gal—just the kind of person you hope to have as your neighbor. As we talked about her favorite books as well as the racial issues in her books, she shared several books she thought would be beneficial to people hoping to understand the turmoil in our world today.

They’re top of my non-work TBR pile now. Because after talking with Joiya, I’m ready to listen much more than I ever have been before. It’s not that I’ve never cared about racial inequality and ugliness. I hate it. However, sometimes it comes at you in the form of an attack that puts you naturally on the defensive. Joiya came at it from a different angle that drew me into a conversation and made me eager to listen, to understand.

The books she recommended were:

Be the Bridge by Latasha Morrison

So You Want to Talk about Race by Ijeoma Uluo

To learn more about Joiya, visit her at her WEBSITE.

And seriously, pray for her physician husband and Joiya’s family. Being on Covid frontlines can’t be easy for any of them.

VISIT https://chautona.com/because-fiction-22 to enter a giveaway for a copy of Petrified Flowers 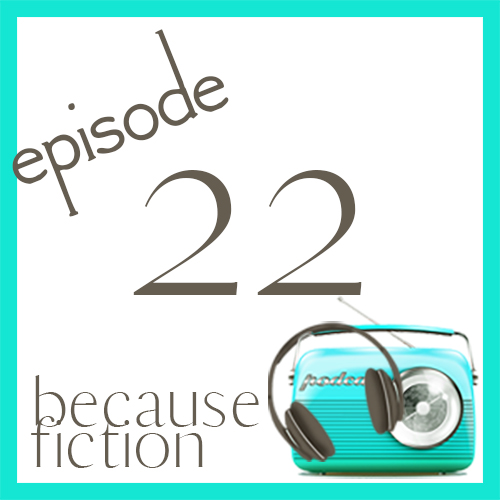 If you missed one of the volumes over the past thr

Reposted from @becausefictionpodcast This week, I