We had a bit of a mixup with Out of the Ordinary. I tried and tried to do the download and finally asked for help.  Turns out, I was supposed to have a paperback.  It wasn’t there.

But other books were also in the line-up, as well as a need to finish NaNoWriMo, so it had to wait until today.

I woke up this morning, eager to finally read this book! I’ve been looking forward to it ever since I read Behind the Scenes. And like that book, though there were things I really liked and others not so much.  So, I ignored almost everyone today and did almost nothing but READ.  It was glorious after a month of heavy duty writing.  This book has a lot to love and a little that I didn’t find quite as captivating. Let’s find out which is what! 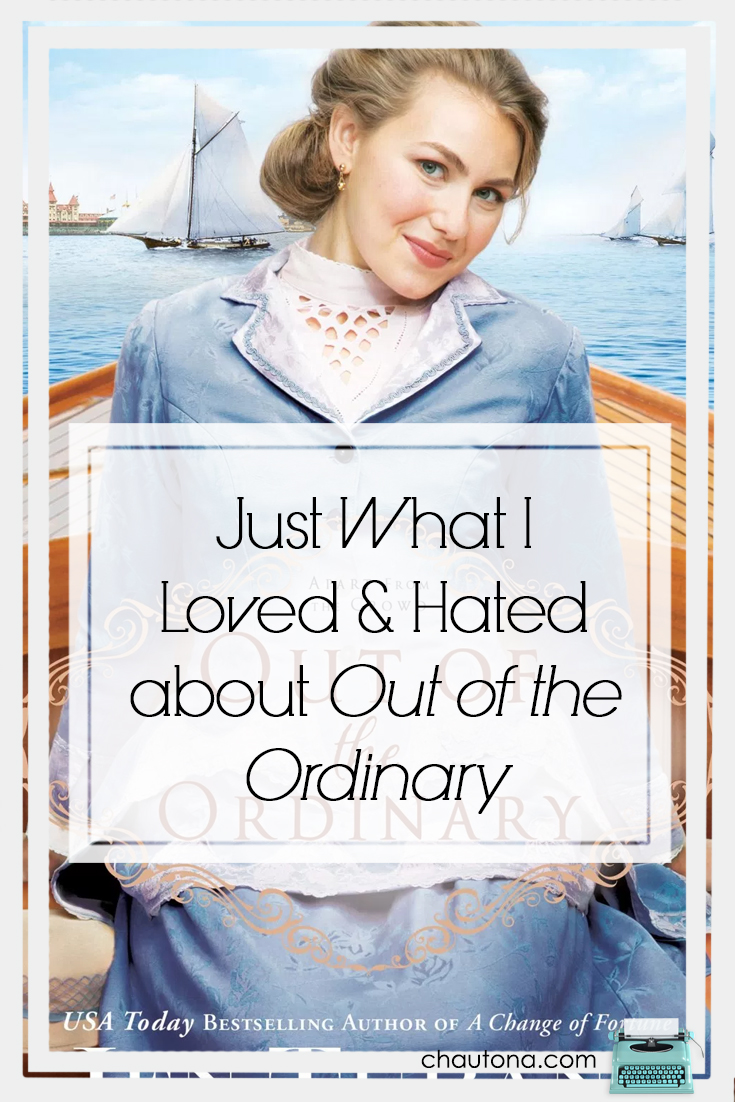 Note: links may be affiliate links that provide a small commisison at no extra expense to you.  Oh, and isn’t that a gorgeous cover???

But now I can tell you what I LOVED and hated about Out of the Ordinary.

I said in my first Jen Turano Review that I was looking forward to the next book, and I meant it.  So when Celebrate Lit offered a chance to review it, I jumped at it.  I even spent hours trying to download the NetGalley copy of it.  Um… yeah.  Didn’t work.  Just sayin’!

And I will say that for the most part, I wasn’t disappointed.  There are several things about this book that  I much prefer over the first.

So about the first half of the book (almost) takes place in one day.  Much like the last one, actually.  But unlike Behind the Scenes, I wasn’t bored.  Not at all. This one did everything that one tried to do and it did it well.  I was captivated from page one.  BRAVO!

And like I said in my last review, because she does it this way, she can have characters who do incredibly modern things or things out of the social norm for the time period without making them all annoying and anachronistic progressives.  They’re just being themselves–whether plucky industrialists or people with an unusual upbringing.  It’s sooooooo refreshing.

And her characters are nowhere near the “Mary Sue” variety.

Even her most dashing heroes do a rather unsuccessful job of being that dashing hero sometimes.  And it works just beautifully.

I’d say the biggest improvement of this book over the last is the pacing.  It was infinitely superior.

But I did run into problems.

I don’t recall if I noticed this in the last book or not, but I think I did.  Ms. Turano has a tendency to repeat herself–often.  Sometimes using the same phrase back to back.  Sometimes that works.  A character will say, “Well, for the life of me, I don’t know what happened,” and someone else will reply, “Well, ‘for the life of me,’ I do!”  That’s interesting and shows a bit of personality.

But there was a line somewhere about how one person wouldn’t have to lift a finger and the other person said she would be lifting a finger–no “scare quotes” or teasing emphasis shown or implied.  Just repetitive.

And it happens often.

There are also mini to long near monologues telling us what we supposedly need to know about something–things they’d never say to each other.  She doesn’t go so far as to do the, “Well as you know, George, you did propose under rather unusual circumstances” bit, but there were places where that reminder was made in less direct but just as “dumpy” ways.

I decided that if I’m going to read Ms. Turano’s books, I’m going to have to get used to it.  It’s her writing style, and I suspect others may not mind it at all.

But it isn’t what I disliked the most.

I’d say the roughest bit was the last third of the book.  It dragged–much like the first third of the first book did.  It was also full of long speeches designed to share backstory and reveal things that we were made to be curious about in the last book.  Unfortunately, I just found them rather tedious.

And, I confess, I found myself skimming.  A lot.  I frankly wanted to be done with it.  It got to the point where I no longer felt sorry for Mrs. Davenport and her sad history.  I began to feel like she got what she deserved and wanted to plead with Samuel the Pinkerton dude to haul her away!

I sound horrible and mean.

I don’t mean to.  Because, even with my complaints, I liked the book.  A lot.  I know I’m going to have to decide if I can handle these issues in future books or not, because I suspect I know who the next book is about, and I am DYING to read it.

And I think that’s what makes Jen Turano a really amazing writer.  She can do things that annoy you like crazy, make you skim parts you don’t care about, and still have you coming back for more.

That’s actually why I’m giving this book 4 stars on ALL platforms–even Goodreads.  Technically, their system would have bumped it down to a 3 star (that’s their “I liked it”) but I refuse to do that to this book.  I liked the book.  I almost “really liked” it.  And I want more.  That earns 4 stars in my book.

Previous Post: « Just What Makes Troublemakers So Crazy Charming, Anyway?
Next Post: When You Wish Upon a Christmas Star… »