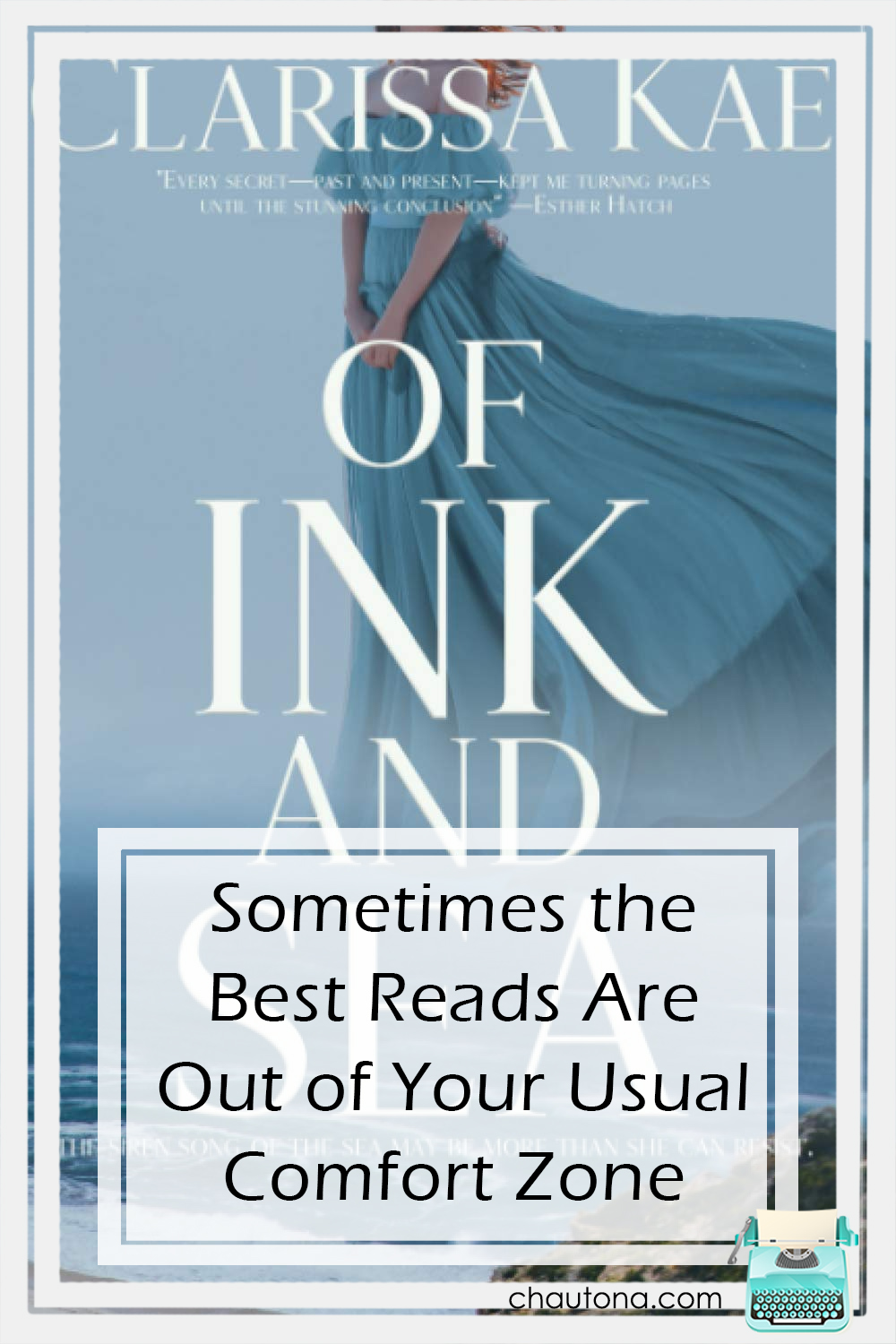 The cover drew me first–that ethereal blend of coastal beauty and a woman in a diaphanous gown. The title then caught my attention. Of Ink and Sea.  Something about it called to me.  A closer look turned my admiration for the cover to a bit of disappointment. The woman floated in air.  Nothing to anchor her and not fading into oblivion as is often the case with similar cover elements.

Partway into the book, I grinned at that cover.  Truth be told, I probably looked like a greedy King Midas the moment he discovers the existence of Rumplestilskin!

I’ve not read a book like it in a long time, and had I known some of the elements, I might have passed it by.  I’m so glad I didn’t–know or pass it by, that is.

Sometimes the Best Reads Are Out of Your Usual Comfort Zone

I’d never heard of Clarissa Kae before requesting a review copy of her recent release. The synopsis pulled me in because really, who can resist the call of Cornwall, Wales, and the sea? After reading Of Ink and Sea, I feel like I should say the siren call.

What I didn’t know when I picked up the book was that I was about to be treated to a delicate, gut-ripping, aching, gritty split-time tale spanning over four hundred years. No, those adjectives do not contradict. There’s a gossamer thread woven through the dual stories in here that whispers hope to the characters and the readers.  Like a spider’s silk, it’s deceptively fine and delicate, but it’s as strong as steel.

This is one of those rare times I’ll say that the first-person perspective used in the present-day part of the novel isn’t only “not annoying,” it’s perfect. This perspective is exactly what the book needs to ensure we deeply connect with Sienna.

But that’s not all.

Of Ink and Sea also manages to weave paranormal elements into a story in a way that makes you believe the story exactly as told. Only the tiniest bit of well-placed repetition hints of where to pay attention, but not once did I feel like, “Yeah. You already said that.”  Instead, it almost serves as a silent warning–foreshadowing used in a way I’ve rarely seen.  Or, rather, seen used so well.

If you’re looking for strong, Christian elements, you’ll only find themes that allude to them.  This isn’t Christian fiction. However, the way the author shows humanity in its weakest and strongest elements, and the consequences of those elements, offers at least a Christian worldview, for the most part.

I do have a caveat.

If paranormal elements bother you–and by that, I mean “seeing” into the past and future, knowing, family curses (not shown in any kind of demonic glory)–this book won’t be for you. One woman in this book was branded a “witch” by those who feared her four hundred years ago. My take from the story is that the author didn’t see it that way, but chose to allow the characters living in the time to agree or disagree based on their knowledge and understanding of things. It was rather brilliant.

That said, this is fantasy.  It’s deliberately “paranormal” rather than a representation of characters who are using ungodly, supernatural power to do what is forbidden.  This is a story told as if in a world where these things can happen. The biggest thing is, however, that world looks just like ours. Most of the world would think these characters are crazy.  For heavens’ sake, the characters in Of Ink and Sea think they’re crazy. But here’s the deal.

No one in this book turns to any outside source or acknowledges anything or anyone for this ability. It’s just there–a part of the story.  Much like a superhero is just there–able to fly or stop a train, or whatever. Because it’s who he is, even if no one else in the world can do what he does.

Well, yeah. If you love split-time novels, a hint of history that isn’t the most common era, and if you don’t mind a couple of minor historical liberties taken (super minor… a hymn brought back a century or so etc.)…  If you love books that show a strong, realistic character growth arc, and if you love beautiful writing that occasionally dips its toes into spooky without actually becoming scary, this is the book for you.

However, if you don’t like to step out of realism, I’d skip it.  As for me, I’ve got her other books lined up on my Kindle.  Clarissa Kae might not write my favorite genre, Christian fiction, but her, Of Ink and Sea, has pulled me out of my comfort zone and into a beautiful story. She’s suspended reality for me in a way that I’d like to experience again. 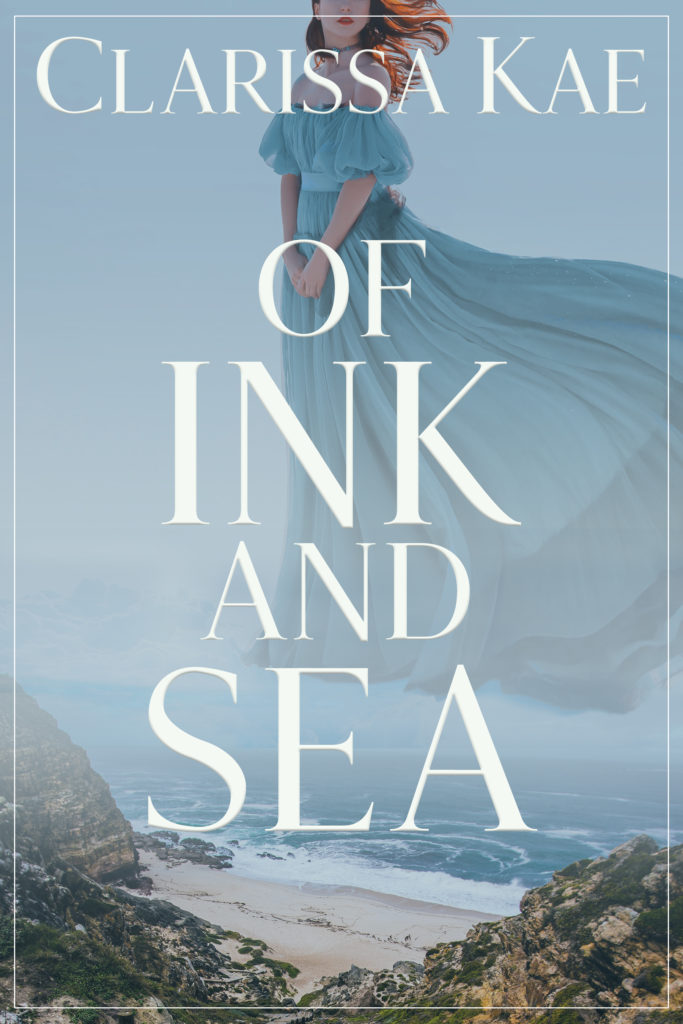 Book:  Of Ink and Sea

The Bristol Sea divides Cornwall and Wales—and sings an enticing tale to Sienna Rothesay, an English born, American raised photographer.  Since childhood, she’s fought the temptation to listen to its siren song.

When Ioan Waif, an enigmatic neighbor from her Welsh days calls her home to care for her ailing grandfather, Sienna is faced with an old myth that hints at a nefarious secret, linking her ancestors with Ioan’s.
To uncover the truth, she must walk the blurry path between legend and reality but with more questions than answers, she fears giving in to her heart will cost Sienna her head.
Share
Pin
Tweet
Email
Share
Pin
Tweet
Email

Previous Post: « The Best Marriage Advice We Got Accidentally
Next Post: The Best Book I’ve Ever Kind of Liked »