To this day, I don’t know what made me ask the question. First, it was none of my business. Second, what a way to slap a friend in the face!

I don’t recall her exact reply. In fact, when we talked about it a few years later, and I brought up what I remembered her saying, she said, “That sounds more like you than me.” And she was right. I’d somehow taken her words and “translated” them into Chautona-ese.

Basically, she said, “What right do I have to bring up the sins that God says He ‘remembers no more’?”

That alone was a great lesson, but she taught me a greater one that I didn’t “get” for quite a few years. The power of letting the past go—forgiveness.

A lot of men would have beaten themselves up for their mistakes. I don’t know if her husband did or not. What I do know is that she gave him such a beautiful gift in “remembering his past no more” that way.

Not all mental illness comes out of a past full of regret, but some does. My experience is more with watching genetic depression attack and wound those who have had a “trouble-free” past. Still, when I had a chance to request a novel that dealt with depression and its effects on our lives, I had to take it. I requested Leaving Darkness with a heavy heart.

After all, it wouldn’t be an easy read. 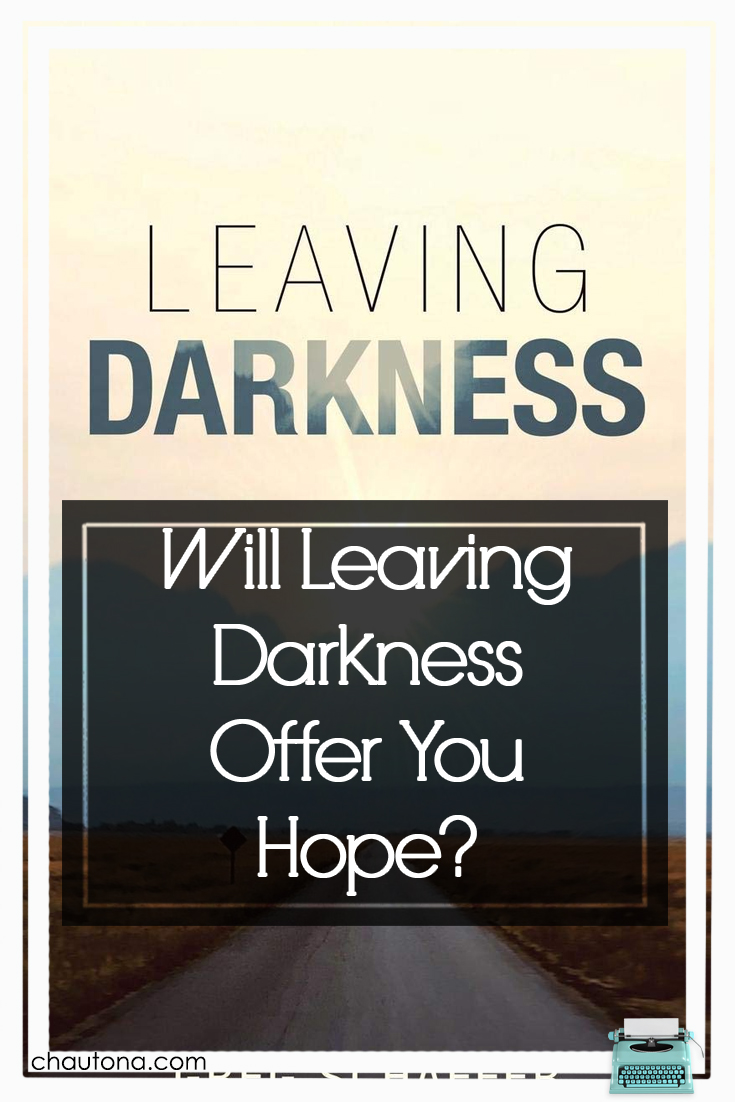 Will Leaving Darkness Offer You Hope?

Written in a natural, relational style, Leaving Darkness tells one man’s journey through his pain to healing. Greg Schaffer creates a protagonist you care about, and his supporting characters are equally interesting and relatable. That said, the antagonist—if he is that–is a different matter.

It’s hard to tell what “Allan’s” role in the story is. Still, that character was the most stereotypical of them all. I could predict his moves not because I got to know a character super well but because he behaved like every other selfish, successful man in fiction.

After a minor inconsistency in the beginning, everything fell into place. Actually, that’s one of the problems with it. With little time and effort, change happened and things just seemed to magically fall into place. Even before conversion (which I was thankful for, actually), after a couple of visits, Lowell nearly changes his entire way of thinking overnight.

As a whole, understanding, change, and repentance all fell a little “on the nose” for me. That and a particular line, something like, “How do you expect God to forgive you if you won’t forgive yourself?” were some of my biggest complaints.

Oddly enough, one of the book’s biggest weaknesses could be one of it’s greatest strengths.

I don’t know how else to describe it, but the book reads a bit like someone took a “how to” book on dealing with depression and addiction and fictionalized it. Instead of “anecdotes” to illustrate a point, the entire manual was laid out for the reader in a fictional setting.

I don’t exaggerate. One meeting is told in such precise detail that I didn’t feel I was “emotionally there” as much as I was intellectually present to learn the day’s lesson. It’s better than that sounds, but it’s still… textbook.

I so wanted to love this book.

And I can’t say I dislike it. I don’t. Leaving Darkness just feels a little too neat and tidy. The people I know who deal with depression cannot ask for help. Most aren’t capable of it. They wouldn’t see a flyer on the wall and think, “Maybe I should see what that’s about.” They can’t choose to leave the darkness behind. They don’t even try. Instead, others have to bring the light to them, set it nearby, and be with them, helping without being asked.

Because they won’t ask. It will never happen.

In case that sounds too dark and fatalistic, I got that from someone who lives with it daily. Who sees it in her extended family—who knows just how bad it gets. From someone who has to bring that light when even hers begins to dim from the constant darkness she tries to fight in those she loves.

So maybe I didn’t love it as much as I hoped I would.

Still, I have to applaud Mr. Schaffer for addressing a difficult topic. Yet another non-fiction, self-help book wouldn’t likely make an impact, but maybe a novel like this, even if it’s a little “convenient” at times, would help someone see that they aren’t alone.

And if one person sees that, perhaps he or she will also see that there’s hope and help to get through the darkness. It likely won’t happen as neatly or quickly as in this book, but I think most people understand that sometimes this is how things happen in fiction.

This is my prayer for this book.

Previous Post: « 7 Reviews of Loss, Love, & Lighthouses on the Great Lakes
Next Post: Patriotism and Heroism and Why It Matters in a Book »