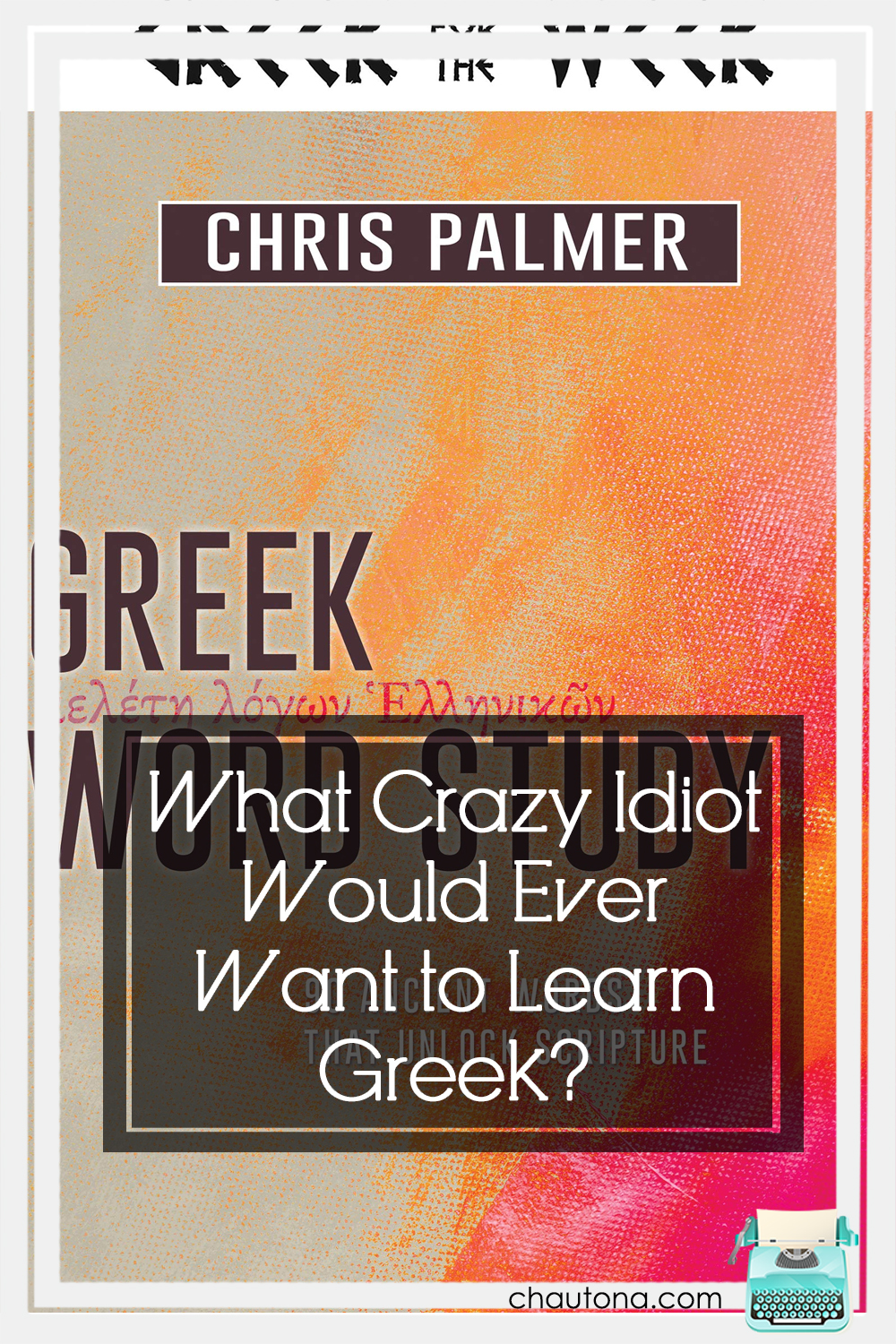 “Is Chautona ever going to go to college?”

My cousin and I are the same age.  While she was at Fresno State getting her degree, I was home raising babies.  Three of them at the time she asked my mom that question.  Mom said, “No… she’s just learning what she wants to when she wants to.”

Said cousin didn’t get it.  “Like what?  What’s she learning?”

Okay, so my cousin didn’t say, “What crazy idiot would ever want to learn Greek?” but I can almost hear the words in her tone as she asked, “Why?”

Fast-forward about twenty-five years.  I had a new friend.  From Greece.  When she found out that my father read the Bible in Greek as much as possible–compared it with English–she asked the same question with a totally different perspective.  “Why?”

I pointed out that the original manuscripts were written in Greek, so we like to understand it as originally… well, written.  As I spoke, a big smile formed.  “You read Greek?”

Although I don’t actually remember what I did there, I suspect I laughed.  After explaining that I try to learn Greek words for things in the Bible but do not know Greek, I was pleased to tell her I could remember the Greek alphabet.  Only then did I realize that maybe I don’t know it.  I mean, is the alphabet the same today as it was in Koine Greek?  I don’t know!

Seriously, the highlight of my year last year?  When she came to our Bible study and read to us from a Greek Bible we had here in the store.  Extra special.

With that background, are you surprised that I requested a review copy of a book called Greek Word Study?

What Crazy Idiot Would Ever Want to Learn Greek?

This one.  And I was eager to see what I’d learn from this book.

Greek Word Study offers an interesting look into the meanings of not only specific Greek words in the New Testament but also the words that those words were derived from.

In a casual, conversational style, the author offers a simple introduction to many of the words we think we’re familiar with and shows the origins of those words.

First off, this book isn’t really what I expected from the title or synopsis, but it really is exactly what he said it is.  Inside, you find an easy to read and simple look at some of the Greek words that pack a punch and will enrich your understanding of the Bible.

Some of the things he said didn’t make sense to me.  Ip front he says that commentaries are difficult to read. I always go to commentaries to make sense of some otherwise unclear Bible passage to make it clear!  So, I started off not quite understanding what he was talking about.  Still, that’s probably just my weirdness showing through.  I wouldn’t be surprised.

I do have one strong objection to parts of the book.

An overall feeling that the author was trying to make the Greek of the Bible “relevant” to today instead of trying to remind us that we need to make our lives relevant to the Word permeated most of the examples.

For instance:  Meme.  That was what he used to show what the word for “Be imitators of God” means.  He went into a lot of explanation for where “meme” came from and then tried to apply it to the lesson. In that same section, he talked about actors and Hollywood, and actually, that analogy clicked more and felt less frivolous to me.  That feels really weird to write.

Then there was the “Whole armor of God” bit.  Hockey helmets.  The history of their use and when they weren’t–same for soccer and some sort of padding.  The whole time I thought, “Because we don’t know what a sword or shield is?  No one has seen Captain America or Gladiator?  What?

Several of the word analogies and explanations really stuck with me, though.

The one for “unsearchable” was probably my favorite, but then I think of “parresia” (diacritic over the E).  Seriously, the way he described that combined with prayer made it all just come alive.  THAT I loved.

As a whole, I’m liking the book.  It is taking much longer to read through it than I expected. I keep rereading and rereading, trying to really get out of it what is in there. That plus readjusting my expectation of what he means by a “Greek Word Study” (we don’t agree on that) is what bumped this book to a 4-star rating.

Previous Post: « Can this Retelling Make Me Love a Book I Never Liked?
Next Post: Ready for the Great Stories from This Exciting Contest? »