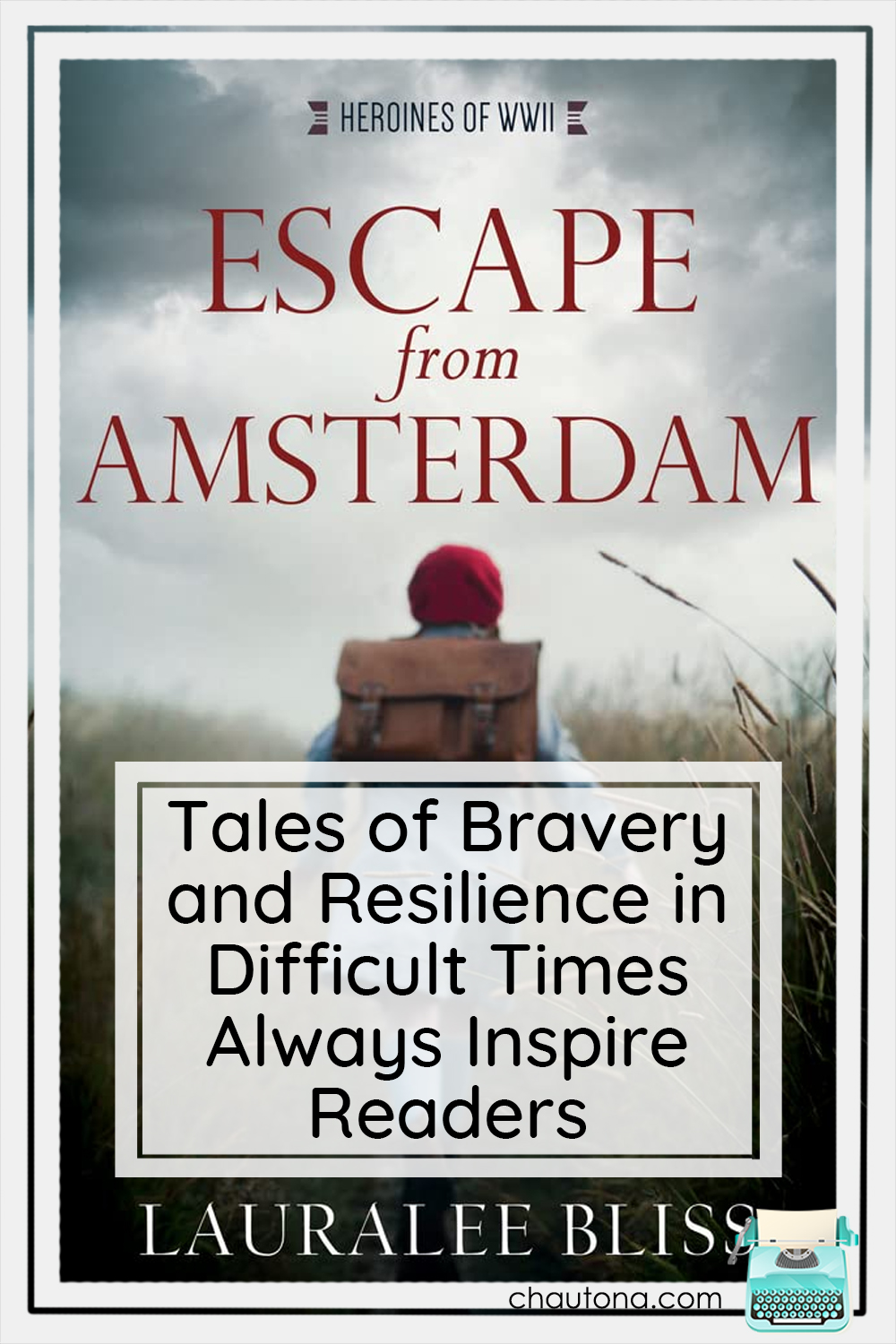 I’ve loved Dutch resistance stories since the night I watched The Hiding Place at a junior high lock-in and discovered it was first a book. I’ve read a few since then, so when I learned that Lauralee Bliss wrote a book about the smuggling of children out of Amsterdam (one of my favorite stories!), I knew I had to read  Escape from Amsterdam.

I love the faith elements in Escape from Amsterdam. I found it beautiful that the character with the strongest faith in the beginning of the story ended up needing the spiritual growth and strength of the one who began as spiritually weaker. That was an unusual twist and done in a way that is completely consistent with the sort of growth that happens during a time of war or intense conflict.

What I didn’t love:

I found the inconsistent (and not with purpose) pacing and the greatest tension/conflict moments were quickly resolved disappointing. In all, the best parts of a book about defying the Nazis and protecting the children were short and often relegated to a quick “telling” narrative. The resistance, the escape, the hiding… I missed the deep tension readers want and expect.

What made me laugh:

There isn’t much to laugh about in a story such as this, but the author did an excellent job of using children to lighten the heart and mood when needed.

What made me cry:

Not being much of a crier, I didn’t. However, even the saddest or most heartwarming bits of the story were mostly due to the events of the time rather than the story itself. Emotionally, I didn’t see Helen’s love for Erik until long after I thought I should have.

Who would I recommend it to:

Lovers of rich Christian fiction that doesn’t shy away from the hard things. Additionally, those who are interested in seeing how actual events may have played out in the lives of those who lived them. I’m grateful for the review copy I received from the publisher and am happy to share my opinion.

I chatted with Lauralee Bliss on Because Fiction Podcast about Escape from Amsterdam, and she shared wonderful stories about her research and the Dutch people during this time.

Escape from Amsterdam is on tour with Celebrate Lit

A University Student Smuggles Children Out of Amsterdam

Helen Smit believed she was called by God to become a teacher. Little does she know that her care for kids will take a drastic turn for survival when the Germans occupy Amsterdam and Jewish children and parents begin to be deported. Now all she can think of is helping all the kids escape before it’s too late.

Erik Misman’s newfound love for Helen is tested when he joins a plot to help move Jewish children to a safe place in the countryside. If danger can foster a closer bond with Helen and save the lives of the little ones, he will do it all. But a German patrol that stumbles upon the farm where they are hiding with three children and a soldier who takes an unexpected interest in Helen, could well destroy their plans for safety and love.

Lauralee Bliss is a published author of many romance novels and novellas, both historical and contemporary. Lauralee’s prayer is that readers will come away with both an entertaining story and a lesson that speaks to the heart and soul. When not writing, Lauralee can often be found on the trails where the author has logged over 10,000 miles of hiking. She makes her home in the Blue Ridge mountains with her family. Visit Lauraleebliss.com for more information about the author and her adventures.

Oh, the simple beauty of the Netherlands. Windmills. Tulips. Dutch wooden clogs. Beautiful Delftware and delicious speculaas cookies. Quaint villages nestled beside the waters. And here I am, an American that was able to visit this beautiful country on the heels of my husband winning a contest through his work.

We had planned to immerse ourselves in Dutch culture, see the sites, and yes, visit places like the Secret Annex of Anne Frank and the town where Corrie ten Boom and The Hiding Place existed. Little did I realize though that this unique trip would become a journey into the heart of a hurting country in World War II.

During our time there, we visited the Jewish Quarter in the center of Amsterdam and learned the details of Nazi occupation for many years that eventually caused two-thirds of the Dutch Jewish population to be exterminated. Walking in the place where a theater once stood and Jewish people gathered there to be deported was indescribable.

Seeing the Jewish stars embedded in the pavement and noting the name of a man or woman killed at Auschwitz, was heart-wrenching. But through these horrendous details came the strength of courage and heroism.

Across the street from the theater, Jewish children were rescued because of the efforts of those who gave everything to see them go into hiding. Thus the book, “Escape from Amsterdam” was born. It honors those that aided and hid Jewish children from the Nazis to avoid deportation. I am grateful for the opportunity to write this story of two common Dutch people, a college student and a grocery store clerk, called to a dangerous mission to save the innocent when the odds were the greatest. It is a timely book that magnifies the strength of courage in adversity and allows us to become better people because of it.

I hope you enjoy this journey and as you do, remember those who came before us and allow their acts of courage to encourage you to persevere, no matter what.

Through the Fire Blogs, October 4

Labor Not in Vain, October 6

For Him and My Family, October 9

A Good Book and Cup of Tea, October 9

Lights in a Dark World, October 11 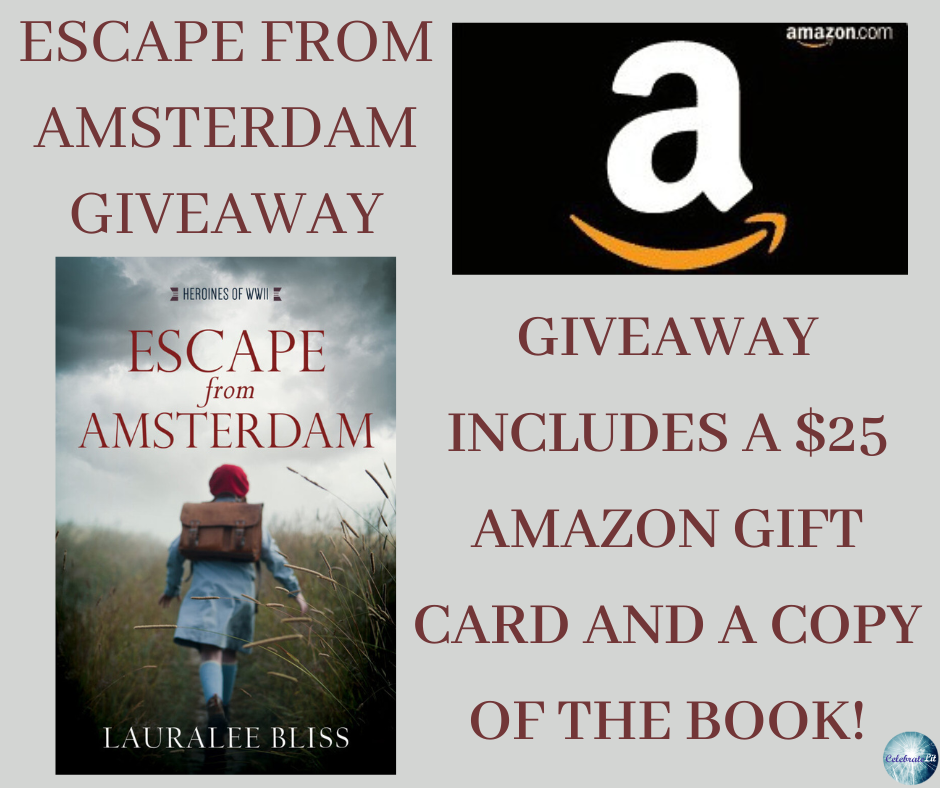 To celebrate her tour, Lauralee offers a grand prize package of a $25 Amazon e-gift card and a copy of the book!!

Previous Post: « You Never Know What Will Inspire an Author’s Next Great Book
Next Post: Action, Danger, Personal History, and Romance—What’s Not to Love? »