(Merry Christmas from all of us at Just the Write Escape) 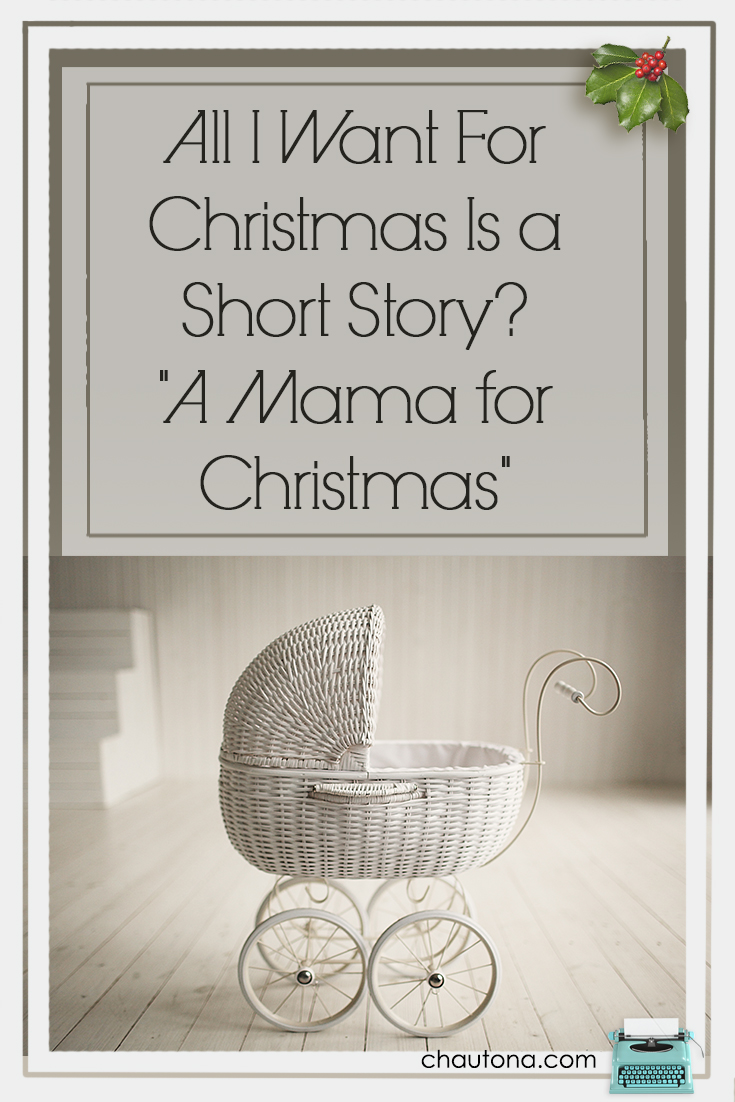 A Mama for Christmas

Toys filled the shelves—cars, robots, games, plush animals, and dolls.  Two full aisles of dolls, to be precise.  Dolls that looked like little girls of eight, Barbies, mini dolls, baby dolls, dolls that wet, cried, and talked.  On one end of the baby section, a double row of baby dolls with pretty dresses and blankets sat stacked four deep—all the size and weight of a real baby.  Sleep-eyes meant that lying down, the baby would look asleep, and the eyes would open when sat upright.

One doll at the far right waited impatiently.  She’d been placed there on the shelf sometime around midnight and waited in eager anticipation to be chosen.  With Santa hats on the employees and “Sleigh Ride” playing over the store speakers, she knew it meant one thing—Christmastime.

There could be nothing better—nothing lovelier than being wrapped in pretty paper and put under a tree for some little girl’s Christmas present.

The doll thought of herself as Cecelia; she hoped for a pretty name like that—nothing simple or boring like Mary or Anne, but even those would be nice as long as she had a real little girl to call…

Would it be a dark-haired girl with chocolate eyes?  A redhead with clear blue eyes as beautiful as a summer sky?  What about a girl with hazel eyes and golden curls?  Or maybe a mocha-skinned woman with dark curly hair would choose her, despite her pale skin, for a little girl who already had a few darker skinned dolls.  That could be exciting!

Of course, being at Christmas meant that she’d have to wait—maybe even two or more weeks—wrapped in paper under a tree.  Cecelia didn’t know how long it was until Christmas, but she’d been delivered after Thanksgiving, so it couldn’t be more than a month, right?  She’d be wrapped in snowman paper—or maybe paper with an old-fashioned Santa Claus on it.

The day passed slowly.  Customers came, shuffled through the boxes, and sometimes pulled one of her companions off the shelf, but never her.  Employees shuffled the dolls around, adding new ones and moving the old ones.  Night fell.

No one bought her.

She tried not to be discouraged—tried not to cry.  There would be tomorrow—or the next day.  She knew shelves were usually empty by Christmas Eve.  She hoped not to be a last-minute grab to have something under the tree.  No, Cecelia wanted to be chosen.

The next day, a woman appeared.  Troubled green eyes examined every single doll on the aisle until she returned to where Cecelia and her sisters sat. This time, she took her time, looking into the eyes of every doll, moving them up and down to see for sure that the eyes worked well. Cecelia almost quivered in her anticipation.

Please pick me.  Please!  I’ll make her so happy.  I’ll do everything I can.

The woman reached for her and set her in the front basket of the shopping cart—where real mamas put their real babies.  Cecelia couldn’t believe her good fortune.  The woman wiped away a tear.  Why?

For almost two days, Cecelia lived in a shopping bag in the living room closet.  She heard Christmas music, laughter, children screaming as they raced through the house.  But at last, her bag, along with several others, was brought out into the kitchen and set out on the counter.  She saw the latest robot, a scooter, several electronic games, but no other dolls.

The woman—a man called her Emily—wrapped three presents before Cecelia’s turn came. She saw the paper just as Emily laid her face down on the wrong side—candy cane stripes.  That’s the best of all.  It’s so thrilling!  I bet she puts a red shiny bow and ribbons on me.  She likes ribbons!

The next week and a half dragged by slower than the long truck ride to the store and felt almost as long as the extremely long boat ride from China.  To pass the time, Cecelia imagined what her life would be like—some little girl’s favorite dolly.  Would the girl sing to her?  Rock her?  Tell her stories and be the kind of mama every little dolly wants?

Of course, she will.

Despite the long wait, Christmas morning finally arrived.  Cecelia awoke to squeals of laughter and giddy children clamoring for stockings and presents.  She waited, impatience growing as she heard the tearing of paper, the squeals of excitement, the murmurs of thanks and appreciation.

At last, someone picked her up and handed her to someone else.  A hush came over the room, and even Cecelia could feel the anticipation.

We’ll “grow up” together.

The box turned over and Cecelia looked into the watery eyes of a wrinkled old woman.  The woman’s hands stroked the box as Emily said, “She’s for you, Mama.  This baby is just for you.  You can take her anywhere—always.”

Disappointment flooded Cecelia as she realized that she wouldn’t be playing with a little girl. Like that one, she thought at the sight of a golden-haired girl playing with several dolls nearby.

We could have had adventures.  She would take me outside to see the playhouse and maybe even put me in a basket on the front of her bicycle.  I’d sleep beside her at night—it would be so much fun!

But instead, the old woman’s trembling hands reached for her and wrapped her in the little blanket.  “Mama” held her close, rocking her and singing Brahms’s Lullaby in a wavering, high voice.

“‘Lullaby and goodnight, with roses bedight…’”

The morning passed with children playing with toys, adults comparing gadgets and books, and “Mama” rocking Cecelia in her arms.   Sometimes Mama sang.  Sometimes she whispered sweet words of love and affection, stroking Cecelia’s plastic hair with the practiced touch of a woman who knows how best to love a baby.

Emily asked what Mama had named the baby.

A touch of disappointment hit as Mama said in her weak, gentle voice, “She’s Mary, of course.  What other name could I give a Christmas baby?”

Sometime later, Mama shifted her and Cecelia-now-Mary saw the pile of abandoned dolls, tumbling helter-skelter and tossed aside as the little golden-haired girl raced outside to play in the snow with the other children.  Mary peeked again at Mama through half-closed eyes and rested content in her new mama’s arms.