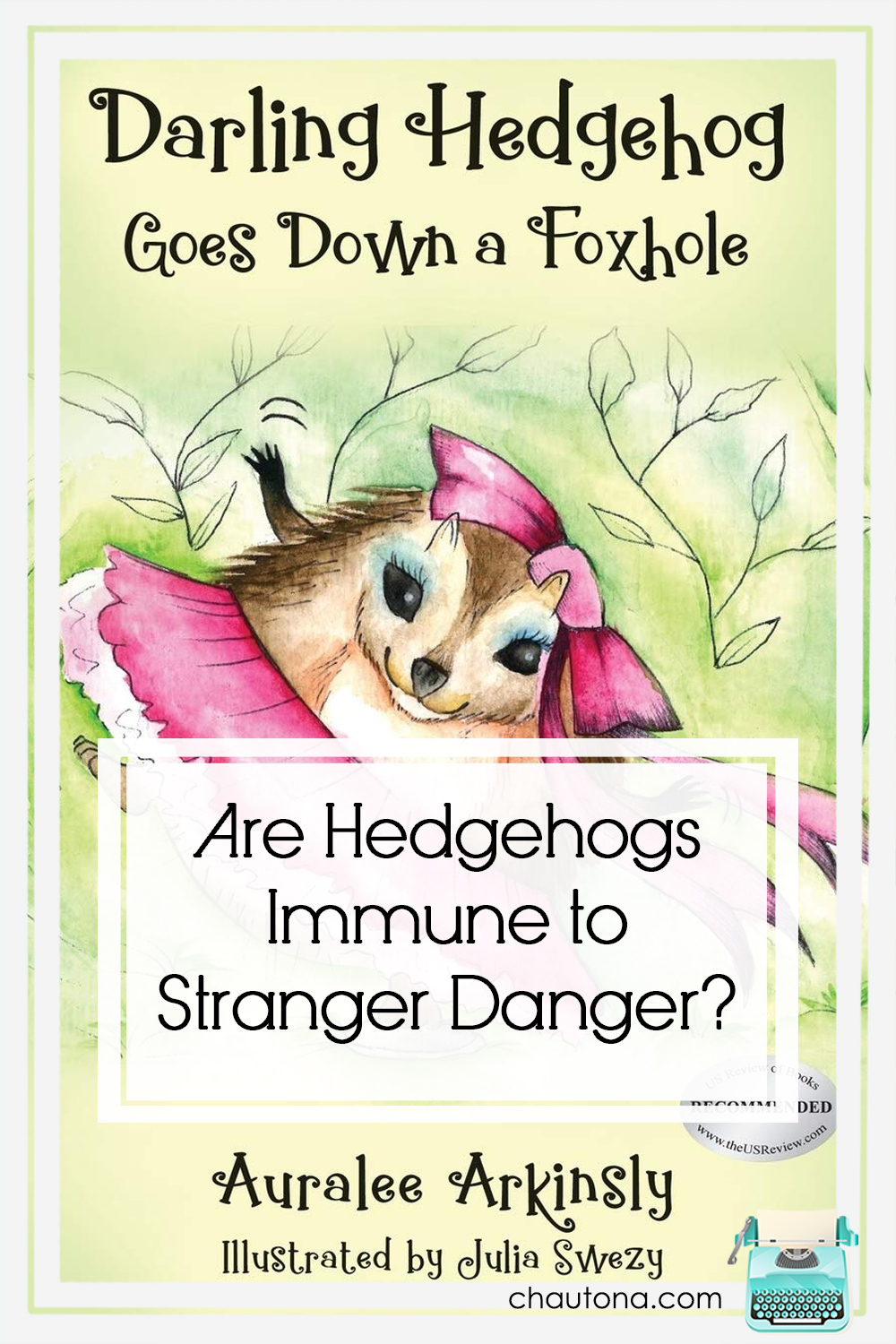 What does one do while one hops BACK in the car to drive BACK to the L.A. area after spending way too much time hopping in cars and driving around said area in the past few months?  One brings a book to read, of course.

Yesterday, those of us in our family who could drove to Los Angeles to attend my son’s final showcase for his Bachelor of Fine Arts program. It’s a three-hour drive from our house to L.A., so being stuck in the car means… you got it, reading and writing!  Since I had a book review due, I didn’t even have to deliberate over books.  Darling Hedgehog Goes Down a Foxhole was kind of a short book for such a long trip, but considering I was going down to crime central, I figured a book about “stranger danger” was probably a perfect choice, no?  But hedgehogs? THAT I had to see.

Note: links are likely affiliate links that provide me with a small commission at no extra expense to you.  Additionally, I requested and received a free review copy of this book and chose to share my thoughts on it.

Are Hedgehogs Immune to Stranger Danger?

Told in a whimsical style, Darling Hedgehog Goes Down a Foxhole is a cautionary tale about trusting people just because they do nice things for you. The book opens strong and with that hint of ominous warning of what’s to come, and ends with a nice happily-ever-after. Adorable, colorful illustrations accompany the text, and the size is perfect for the chapter book it was designed to be.

I do have a couple of quibbles.

First, Darling’s obsession with “doing something nice” for someone who gave her a gift didn’t ring true for me. Very few children I’ve ever met would be so dogged about essentially “paying for” a gift by doing something for the giver. Most of the book is a quest to find just the right thing to thank Miss Fox for her gift.  It dragged out the story and bogged it down in the middle.

Additionally, the author states that she originally planned it as a picture book and received advice to make it a chapter book. I think I might have offered the same advice as written, but looking at it as a final product, trimmed and tightened a bit, it would have been a perfect picture book. I’m not sure how many second or third graders will be captivated by a story concept we usually associate with younger children.

For the persnickety, there are a couple of typos in the hardcopy.  Personally, I imagine children in the targeted age group enjoying finding them, but there you have it.

Recommended for youngsters who read far above their age level and as a picture book for younger children with longer attention spans.  You could always skip half the middle where Darling searches and searches for some way to repay Miss Fox for her gift. 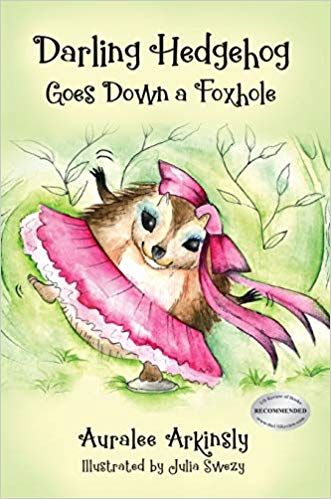 Darling Hedgehog learns about the animal nature of things in high humor and carefree, cute, and winning episodes. This childhood story reads a bit like Aesop’s Fables or a retelling of Little Red Riding Hood, for children 4-8 or preschool and kindergarten, as a read-to-me picture book, and first grade and second grade as a chapter book.

Pictures similar to the Mercy Watson series are characterized and painted in full-color, though the pages are set up like a chapter book.

This book helps to train children in natural wisdom, analysis, and discernment. It helps to balance the teachings of acceptance of everyone and friendliness to all. There may be good purposes for everyone to exist under heaven, yet all purposes may not be good for a child. So, beware, be discreet, and flee from crafty foxes especially when they are holding your parents in the pantry. 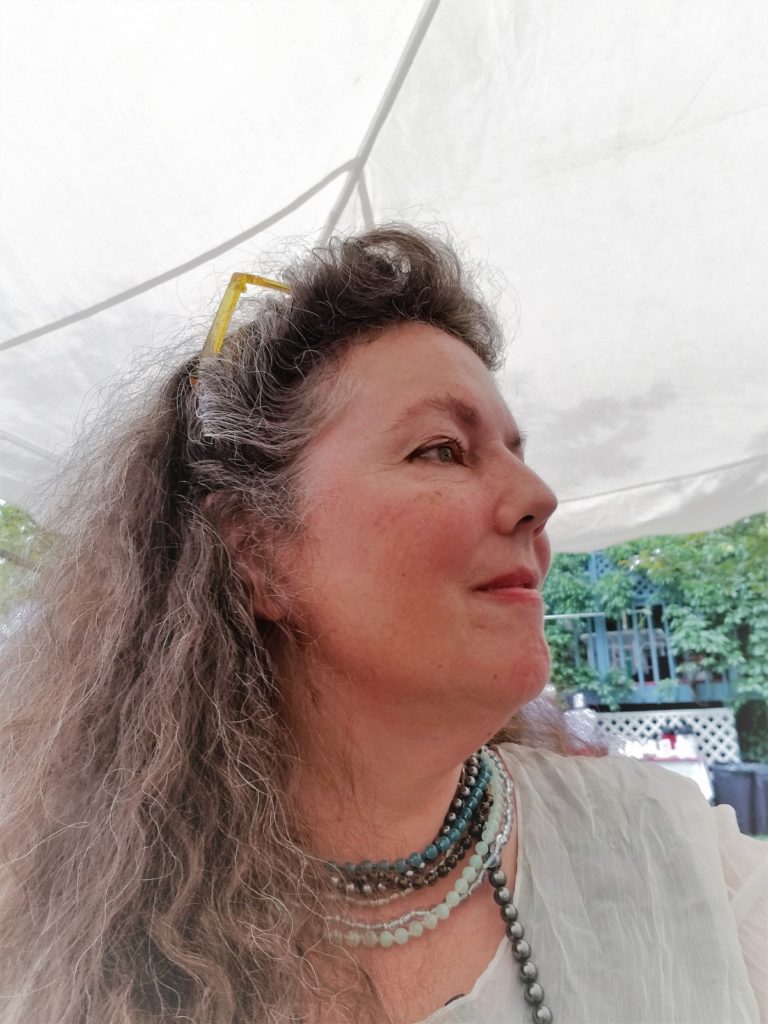 Auralee Arkinsly writes in good humor about serious subjects because kids of all ages can learn a lot from laughing. She is a strong believer in right and wrong but knows that getting onto the right path can mean falling down a slippery slope. She reckons if she can save some from the bumps and bruises, then she has done her job

I’m so excited to launch my children’s book, Darling Hedgehog Goes Down a Foxhole with the Celebrate Lit crew!  You are a river of hope for a new author.

So, here’s the story behind the story.

My friend and fellow author, Kathy Joy, left me a small hedgehog in a tutu as a going away gift on her guest bed after she had been visiting. I put it on the windowsill in my bedroom, and every morning, I would see it when I awoke.

I don’t know if you can relate to this experience, but I often wake up from a good night’s sleep with the gift of a problem being solved.  Sometimes, I wake up with a creative idea.  Well, one day, I awoke to find that I had the beginnings of a child’s story about where the hedgehog found her tutu.

Initially, it was a simple story about Darling Hedgehog finding a foxy friend who helps Darling find her calling.

I wrote out the story and then asked a talented neighborhood girl if she would like to draw the pictures for the tall tale. Having seen a lot of Julia’s sketches as she grew up, I thought that she might like to know what it felt like to earn money from her talents and at the same time, learn about the process of creating a book with an author to propose to a publishing company.

Julia was in ninth grade. She was at the age where she was beginning to think about high school jobs and even to make plans for college and a career.

The same day we wrote out our contract, Julia sent me her first image of what she imagined Darling to look like. It clearly was not a mistake to hire this young artist!

When I awoke another morning, I believed God had given me another bit of advice. I needed to do better research on the nature of hedgehogs and foxes, their habitats and characteristics. The outcome caused the story to take a turn towards intrigue.  It became a fable. Then it became an action-adventure animal story.

A librarian encouraged us to continue with it no longer as a picture book for very small children but as an early reader chapter book for second graders learning about similes.

I hope that we can teach children to notice facts and objective truth as they are being trained for life. So, I’ve accepted that my child’s fantasy had to grow some legs of gravity and wisdom.  I’ve trusted my editors and beta readers that this is true, but I’m not above being told off.

For Him and My Family, December 12

For the Love of Literature, December 13

Lights in a Dark World, December 18

Because I said so — and other adventures in Parenting, December 20

With a Joyful Noise, December 23

To celebrate her tour, Auralee is giving away the grand prize of a set of Darling Hedgehog greeting cards!!