Sorry for the delay in getting this up.  Fell asleep while writing last night.  Hope that’s because my sleep cycle is messed up and not because I am writing something that boring.  Eeep!

So… retellings.  They’re popular.  Just think about how many Cinderella retellings there are out there! Currently, Austen retellings are the craze—contemporary, continuing-story, and even one set that takes place in 1930s United States.  Dickens retellings are fun and becoming more popular…

And then there are Biblical retellings.  Although those aren’t as popular, I recall one about Jesus coming to earth in the late 19th century and how that would have affected the world if it had happened then.  Good book, actually.  Esther is a popular story in these, as is Isaac and Rebekah.

Of all, though, Ruth and Boaz’s story is probably the most common.

A few months ago, I came across a new book—Shadow Among Sheaves. It would be a retelling of Ruth and Boaz in mid-nineteenth-century England, with “Ruth” being a young woman from India. I immediately requested a review copy. 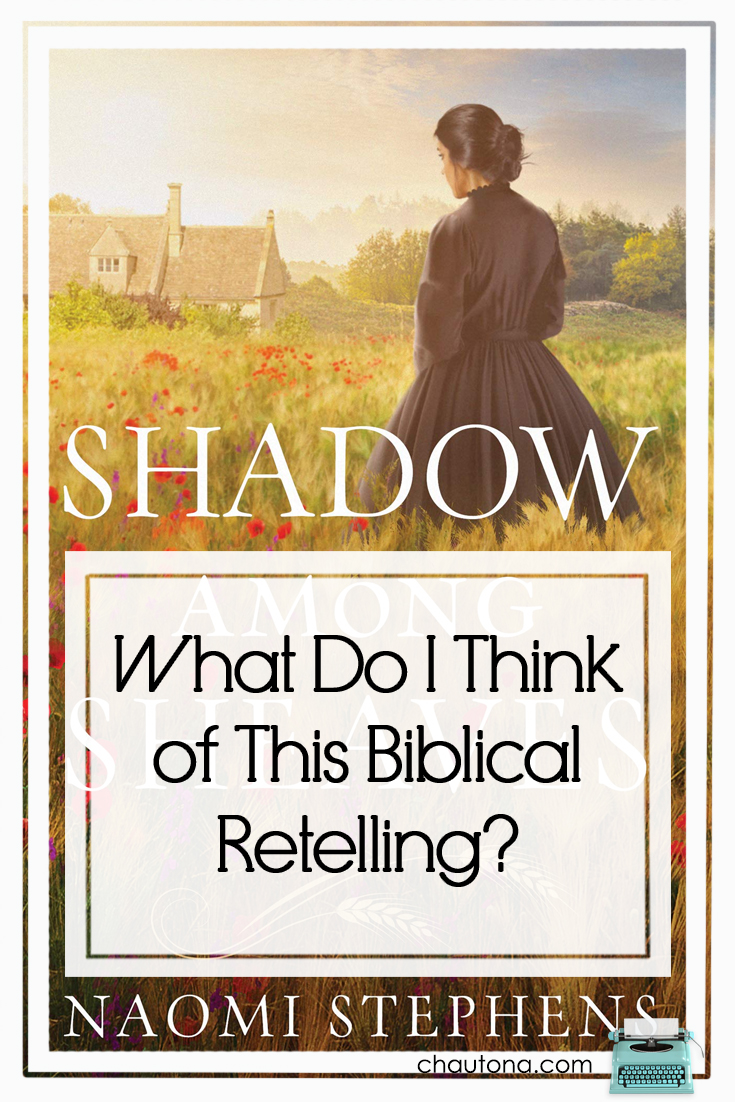 Note: links may be affiliate links that provide me with a small commission at no extra expense to you. Additionally, I received a free review copy and chose to share my opinion of my own accord.

What Do I Think of This Biblical Retelling?

Will you forgive me if I say I don’t know?  I really don’t. So, I think I’m going to just give you the good, the bad, and the verdict. Maybe that’ll help me sort out my thoughts.

I caught sight of a use of hell, and while I don’t remember the exact place, I do remember thinking, “Well, she didn’t use it for swearing.”   Still, some people are complaining that the book has unnecessary language in it.  So, I either missed it because of having to start and stop so much, OR… they had ARCS (which I suspect) and it was all removed later.

Look, I know she needed to show us just how badly Rena would be treated in Victorian society, but Ms. Stephens did treat us to a lot of reminders of the uncouth things men would say to and about her. Instead of making me sympathetic to her, it just got wearisome.

What I was uncomfortable with was the method.  It absolutely does not work for the height of the Victorian Era (right as Prince Albert dies.). What the Naomi character recommends Rena do just would not have happened.  Period.

This actually ruined the book for me.

I promptly deducted a star for it because in a book that was so good to stick to the theme and tone of Ruth/Boaz without being too “on the nose,” that’s exactly what Ms. Stephens did there.  The scene on the threshing floor in the Bible isn’t a sexual one, but it did have the potential to ruin Ruth’s reputation if she was observed.  Perhaps that’s why the author used it so literally, but it rang untrue to me in reading Rena in Barric’s bedroom at night when there were many alternate options that would have worked in English society.

That’s what God did in His version of the story—He used the customs of the society in which Ruth and Naomi lived to play out His plan for their lives.

While Shadow Among Sheaves didn’t live up to its potential or my hopes, it was a good book, well written, and engaging. The spiritual content wasn’t there on Boaz’s side, which bothered me, but Rena’s saving faith felt natural and understandable as a result both of Nell (Naomi)’s example and the parson’s involvement in their lives.

Still, I’ll be watching Naomi Stephens’s books in the future.  I do really enjoy her writing.