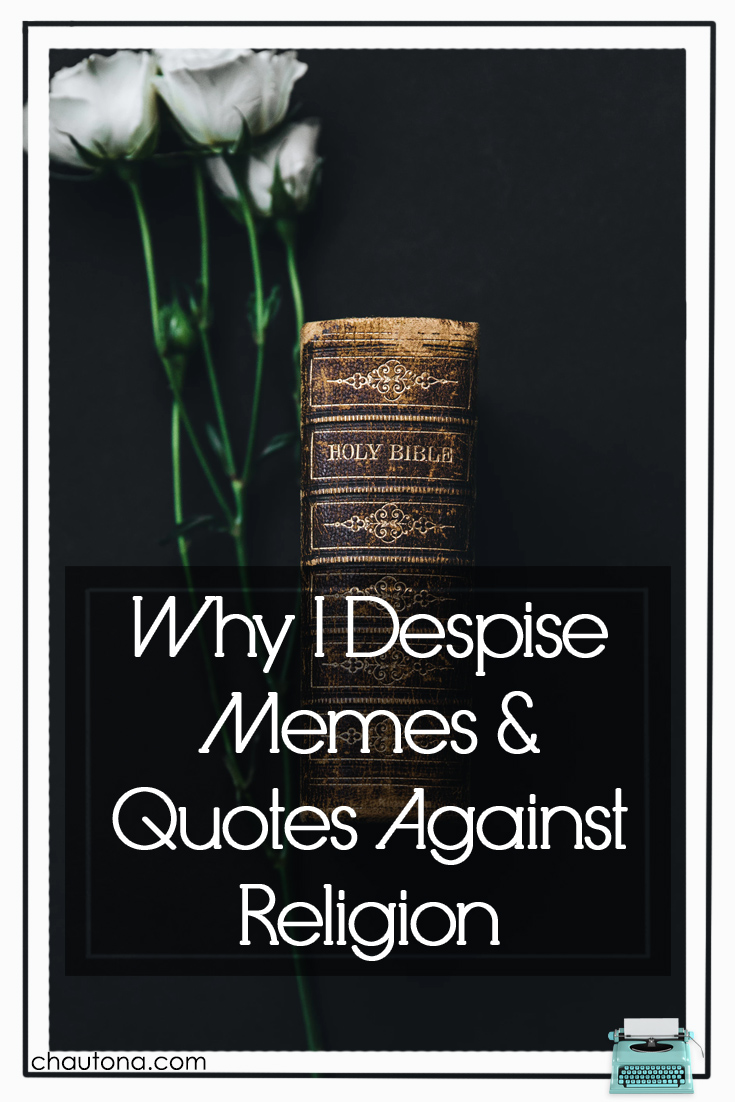 I can’t be the only one who has seen Facebook, Twitter, Instagram, Pinterest, or a blog with a meme or quote image like —>
that one.  It’s so pretty.  It sounds so spiritual and deep.  It sounds so anti-formulaic.  There’s just one problem.

That’s right.  I said it.  I went there.  I’ve kept my opinions mostly to myself for the past few years as this kind of comment has become more and more common, but I can’t anymore.  This plays right into Satan’s hands.  Seriously, I think he looks at these things and cackles while rubbing his fists together in fiendish delight.

Pure and undefiled religion in the sight of our God and Father is this: to visit orphans and widows in their distress, and to keep oneself unstained by the world.

GOD says there are three aspects to pure and undefiled religion.  There is a strong implication (and when taken with other Scriptures on the topics, command) that He expects these things of us simply by their mention in His Word.  Those aspects are:

But what about works?  We’re saved by faith!  Religion is just faulty ‘works of righteousness’!  Yeah… the same book had something to say about that too.  Next chapter:

But someone may well say, “You have faith and I have works; show me your faith without the works, and I will show you my faith by my works.”

Our faith is not divorced from our actions.

We demonstrate our faith (show fruit) by our actions (“works”).

I had someone say not too long ago, “I’m really glad you don’t have religion in your books.”  I almost cried.  Seriously.  It takes a LOT to move me to tears.  But honestly, what was meant as a genuine compliment was a slap in the face.  Why?  Because when I hear that, I hear that I have not created characters who try to demonstrate their faith through helping the less fortunate and by how they keep themselves “set apart for Jesus.”

Look, I know that’s not what all of these memes mean.  I  know what they sometimes intend to say.  And some, like this one, use careful phrasing (the use of can there is wise).  There’s just one problem.

It’s still a lie in how it can (see what I did there?) come across.  People often don’t read “can” and see it as a qualifier. Too often, it becomes just a word among many to emphasize the point that religion is bad.

It’s probably not what the original author intended.  I seriously doubt it is.  I think she was careful to use it to point out that religion isn’t inherently evil. People who think rejecting religion is spiritual use it that way. Instead, she’s calling us to put the emphasis back on Jesus.

It sounds so godly.  But what does it mean when you really think about it?  It means that what Jesus had to say about religion–that there is a pure and undefiled form He WANTS from us–isn’t good enough.

Sometimes I wonder if God is angry or just WEARY of how much we try to apologize for our faith.  Does He weep for our foolishness when we try to make His way palatable to the lost?  Does He want to grab that whip and drive out the “truthchangers” who try to make His Word politically correct?  Is He as “done” with Christianized “buzz words” as I am?

Or am I just all wet?

Probably.  I won’t pretend to have cornered the market of spiritual knowledge.  But this I know: Let’s stop apologizing for being religious!  Let’s just make sure that our religion is what GOD defines it as–that it’s an offering to a gracious and loving Lord.

*steps off soapbox, smashes with Izma’s hammer, scuttles back to her lair,  opens Scrivener, and gets back to work*

Previous Post: « I’m a Liar (And 5 other confessions while I’m at it)
Next Post: Sister Fix: or how to complicate life »