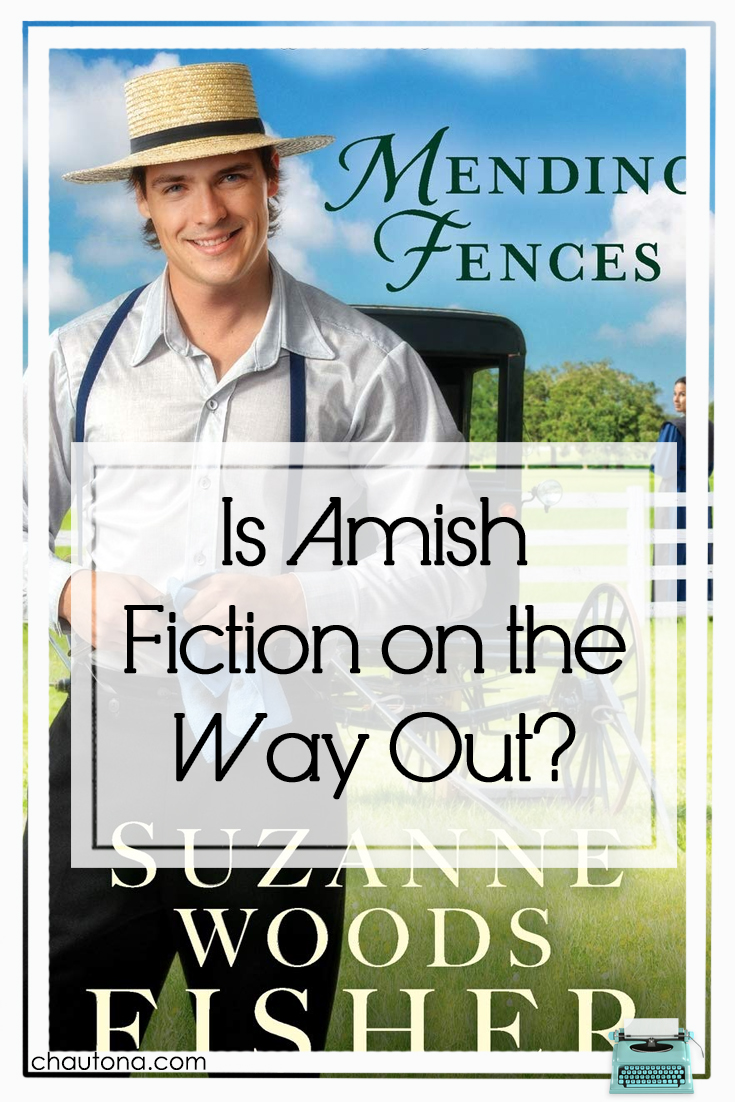 Mending Fences—the title could have meant anything, but I suspected it would be about the more psychological rather than the physical side of the saying. She picked up the book and eyed it with a skeptical look on her face.  “They’re all the same—or at least, they start feeling like it.”

Look, she made a point. It’s an argument you see in book discussion groups.  Still, I pointed out Suzanne Woods Fisher.  “Her Anna’s Crossing series isn’t the same-old, same-old.  I mean, historical Amish. That’s a neat twist.”

If I’m honest with myself, she was just saying things I’ve often thought.  It’s why when the book came up for review, despite being by an author I’ve enjoyed, I almost didn’t request one.

When you like someone’s work, you want to keep liking it.

Then she said something else.  “Is Amish fiction on the way out?”

That got me thinking about all those discussions I’ve seen—the ones defending anything with a buggy or a bonnet.  The ones criticizing anything with that buggy or bonnet.  To listen to some, if Amish fiction isn’t “on the way out,” it should be.  To others, the world might as well stop spinning if we can’t have a good Amish romance from time to time.

Then there’s folks like me—not quite ready to say there’s never a place for it but also not the first to grab the latest offering.  Or the fiftieth.  Not even the hundredth.

Last night I read Mending Fences, and I think I have an answer to that question.

Is Amish Fiction On The Way Out?

Confession time: I didn’t read the synopsis.  I just clicked and asked for a review copy when it came up and took a chance that I’d like it.

The first page offered me something I hadn’t seen before. An Amish kid just out of rehab.  For the third time.

That said, Ms. Fisher did a fabulous job of making me despise the main character. I couldn’t stand him.  For the curious, that’s a good thing.  We’re not supposed to like him. Not at first.

This book took me a little bit to get into. Seeing Luke flounder and throw his pity parties, seeing him play the victim card after he’d victimized so many people—it was a tough sell when we’re supposed to like him eventually.

I wasn’t sure that “eventually” would ever come.

I should not have doubted.

In Luke Schrock, Ms. Fisher has created a well-rounded, delightfully flawed character. His lack of perfection only adds to that perfection.  So, that stereotype of Amish fiction where the readers complain of too-perfect characters?

Yeah, you won’t find that in this book.

The plot of Mending Fences is a gem as well.

Look, I shouldn’t have liked it.  I mean, when you break it down to its simplest form, the book is like a post-rehab playbook.  Confess your wrongs. Ask forgiveness. Make amends.  Seriously, I thought it would get old. It should have.  I’ve read other fiction recently that did turn it into a fictionalized “how-to” story.

Ms. Fisher didn’t.  She made me care about each story.  She made me love the characters and appreciate that our actions have consequences that we cannot possibly imagine.  That’s pretty awesome in my book.

I did have a couple of small quibbles.

First, I think it might need another pass with a proofreader.  My copy doesn’t say that it’s an advance reader copy. There’s not a thing to indicate it isn’t the final.  And so for those who are bothered by typos, there are enough that I noticed and remembered several of them.  They didn’t affect my rating at all, but I thought I’d note it.

My biggest quibble, however, is one of the plot points.  It just got way too coincidental for my taste. The first was nice.  The second a surprise-twist.  But then the next, and the next, and… yeah. Too much.

Still, I really enjoyed the book, and I’ll probably read the next in the series.

So yeah… you know what?

I don’t think Amish fiction is on the way out, and if Amish authors keep writing stuff like this one, I think that’s a good thing.  And for fun historical Amish fiction by the same author, try the Anna’s Crossing Series.