Lost in dreams of term papers, finals, and job applications, Aggie rolled over, sliding further under the sheets in a futile attempt to drown out childish shrieks outside. “Lord, I am so grateful I decided against elementary education. Can’t you prompt the mother of those kids to make them be quiet?” As the shrieks turned to wails, she groaned and added a pillow to her makeshift soundproofing. A new thought crossed her mind. “Lord, why are kids—”

Understanding dawned. Just as Aggie jumped from her bed and flew to the window to see if she could determine the cause and culprits of the banshee-like chaos outside, she heard Tina’s no-nonsense voice. “All right, that’s enough. You’re making enough noise to wake the dead—or at least your aunt.”

“A few seconds ago, those two were nearly synonymous,” Aggie muttered dryly. “Besides, the way your voice carries, I’m sure Murphy is feeling properly chastised right now, and she hasn’t done anything wrong. Yet.”

The protests of the children, as Tina ordered them into the kitchen, told Aggie the woman might need backup. She hurried from her room and down the stairs, and was on the second floor before she looked at her knees peeking out of her summer nightgown. The last time she’d left her bedroom without getting dressed first, Luke had tried to avoid a snicker when she grabbed her keys to run to town for a gallon of milk. “Mibs,” he’d said while strolling from the room, “wouldn’t you rather put on something more appropriate for a trip to the store?”

She turned on her heel and scrambled up stairs. Naughty children could revel in their naughtiness for just a couple of minutes while she threw on a skirt and t-shirt. So obsessed was she with getting downstairs, Aggie didn’t have time to glance in the mirror. It was a daily ritual. She woke up, brushed her teeth, got dressed, brushed her hair, frowned at her appearance, prayed that they’d be done with renovations soon, and then dreamed of the day she could take her faded, stained, holey clothes out to the fire pit she hoped to have and burn them.

Pandemonium reigned in the kitchen. Vannie held Kenzie in a chokehold as she argued with Laird who restrained a kicking, screaming Cari. The other children all spoke at once, while Tina repeatedly cried, “Just calm down and tell me what’s going on!”

“Stop!” Silence descended instantly. Scowling faces threw nasty looks at each other, but all arguing ceased.

“Just remember, ‘stop.’ It’ll save your sanity, I promise you.” Turning to the children, Aggie pointed at Cari. “Tell me what you did wrong.”

“I didn’t ask what Kenzie did. I asked what Cari did. What did Cari do wrong?”

Taking a deep breath while biting her tongue, Aggie led Cari to the corner. “Stand there. Not a word. You listen to how this works; I didn’t ask what she did. I asked what you did. You’ll get a turn in a minute.”

A few mumbles began, but Aggie’s stern face soon squelched them. “Kenzie. What did you do wrong?”

“Kenzie…” Aggie leaned against the island, crossing her arms.

“I wouldn’t let Cari play with me.”

“That isn’t nice, but it isn’t against the rules. Anything else?” A pointed look from Laird told Aggie all she needed to know. “I’m waiting.”

“What did Lorna do?” Aggie’s sigh wasn’t lost on Vannie and Laird.

The pixie-eyed girl sniffled. “I kicked her.”

“Kenzie?” Aggie’s eyes flew to Kenzie’s legs to see if there was any evidence.

“No, Vannie.” Lorna’s indignation had returned.

“You kicked Vannie.” Trying to hide a smirk, Aggie rubbed her nose. “Ok, and why did you kick Vannie?”

“’Cause she slapped Cari’s hands.”

Aggie’s eyes closed for a moment as she processed this information. What was she going to do now? As if inspired by genius, an idea formed rapidly in her mind. “Laird, who did not do something wrong this morning?”

“Ellie,” Aggie began, “did you do anything wrong this morning?”

“Probably. I wanted to do a lot of things that are wrong.”

“Knock some heads together,” the child admitted. “Mommy would be so ashamed of us.”

“Not you, Ellie,” Tavish argued. “You tried to be a peacemaker.”

Before a new argument erupted, Aggie shook her head. “Ok, ok. For the record, Ellie, temptation isn’t the sin. It’s not a sin to feel like doing something wrong, as long as you turn around and do the right thing instead and don’t dwell on the temptation.” She tugged at Ellie’s thick braid and sent her to pour herself a bowl of cereal.

“Ok, did anyone else here manage to avoid doing anything wrong before…” Aggie peeked at the clock. “Seven twenty-five?”

Laird shrugged. “Probably Vannie. She’s always doing the right thing— even if it is obnoxiously bossy.”

“Obnoxiously bossy isn’t the right thing. Ok, so for the rest of you, I want you to go upstairs, put on your pajamas, and brush your teeth. Go!”

“But I’m hungwy!” Cari’s wail from the corner prompted a few echoes, but Aggie silenced them with another order to “stop.”

“If you want to eat at all today, I’d suggest you obey without arguing.”

Fifteen minutes later, the only sounds in the Stuart-Milliken abode were those of Ellie rinsing her bowl and storing it in the dishwasher, and Ian giggling as Tina fed him his breakfast. Ellie danced upstairs for her sketchbook and pencil before racing outside. Aggie hardly noticed. Instead, she turned the page and finished her Proverb-du-jour, before closing the Bible. “’Avoid it, do not pass by it; Turn away from it and pass on, ’” she whispered. “Now, how do I get that through their heads?” 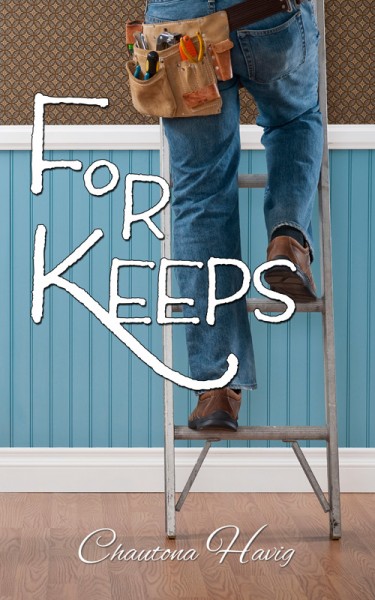 Reconnect with Aggie as she begins to get a handle on motherhood, just in time for love to throw her for a loop.

Her first six months of “motherhood” included an ant infestation, a major move, house renovation, and lessons in how to be a mom to eight lively children.  Now that the house is nearly complete, her children are headed back to school, and she has a few tantrums under her hymn-singing belt, Aggie is certain life will settle down.  Poor Aggie…

William makes his intentions known, Luke and his mother are always there for her, and between a new kitten, a box full of puppies, and chicken pox, Aggie’s home begins to resemble the local zoo!  Her children keep testing the waters, the unrealistic budgets she makes refuse to balance, and she learns that life with children means that nothing stays done and perfect for long.  Add Geraldine and her histrionics to the mix and it’s no wonder she’s ready to run away from home.

When a surprise letter arrives, everything could turn upside down.  Relief is in sight, but can she bring herself to jump to plan B?  Has this just been a practice game, or is she playing for keeps? 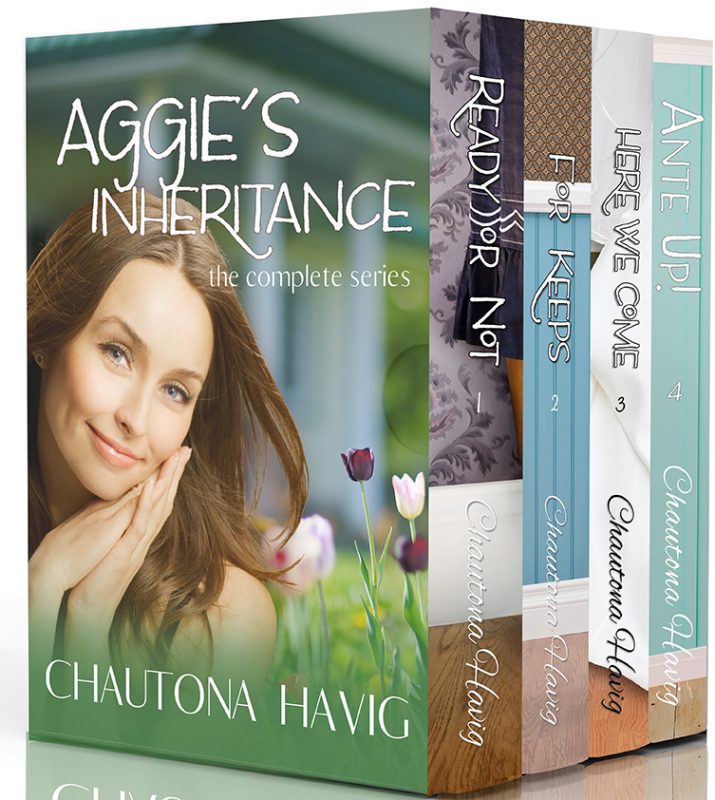 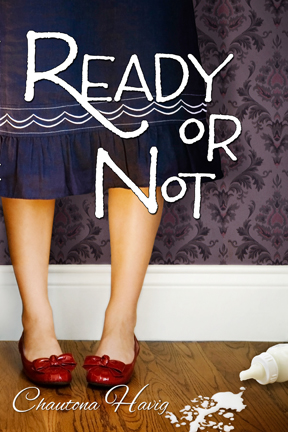 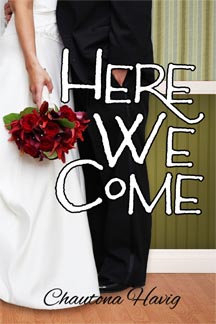 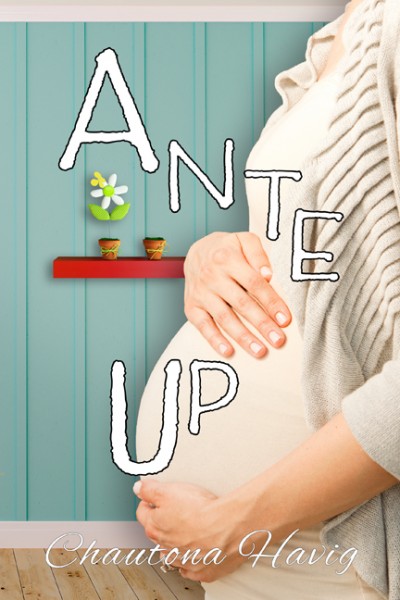 Ante Up (Aggie Book 4)
Look Inside