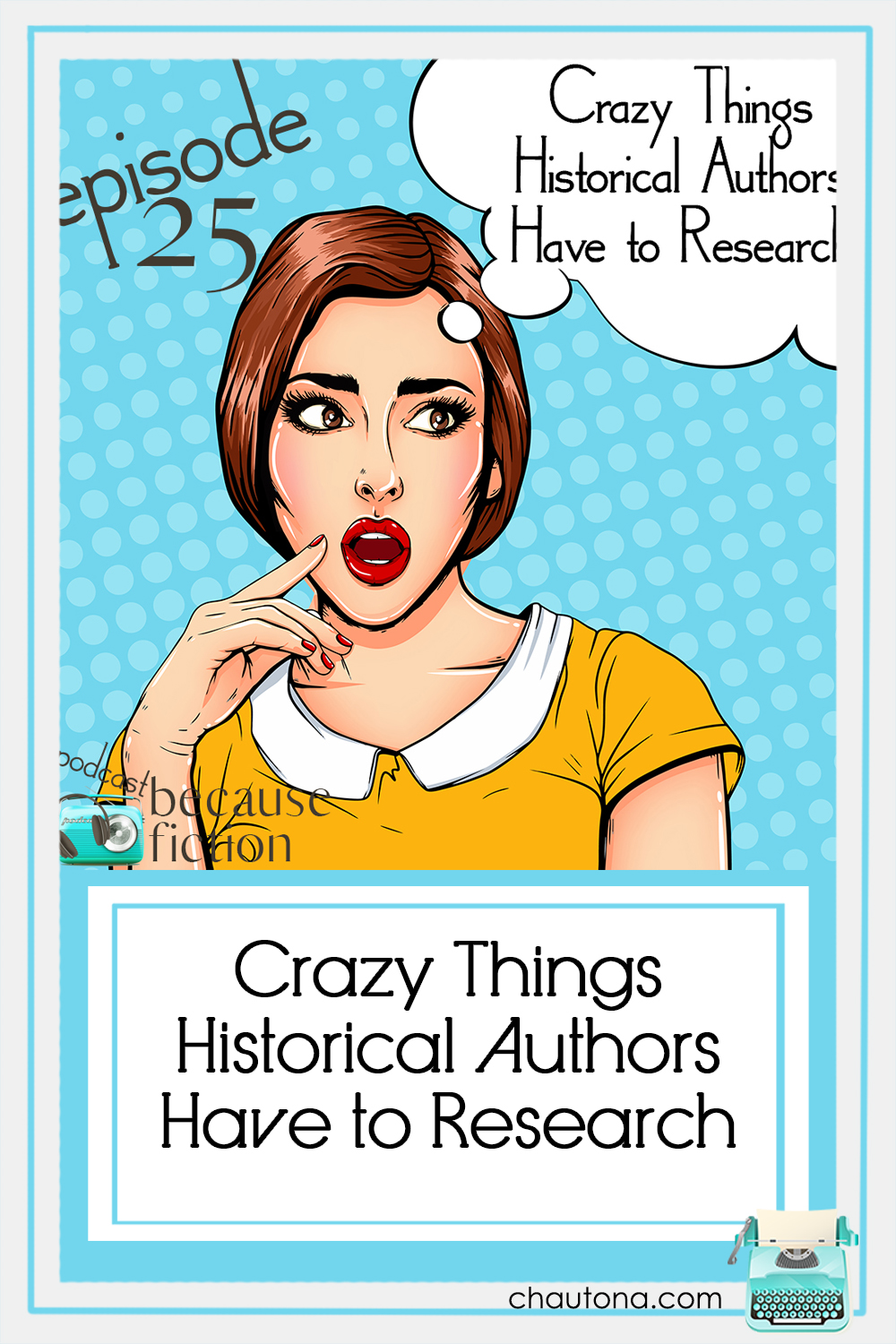 Most readers have a good idea that historical fiction requires heaps and heaps of research. It’s obvious that you have to find out what happened when and similar details, but what other sorts of things do authors uncover, and do those things ever spark new ideas?

Cultural norms, seemingly unrelated historical facts, and word usage are just three things that can completely change the direction of a story! Getting things wrong is crazy easy to do, even with hours of research, and sometimes you just can’t find the answer no matter what you do. This week, we’re going to chat about some of the things I’ve had to do in researching my books.

Okay, let’s start with general history.  Look, even a mere fifty years can completely change the world we live in. Imagine what changed between 1800 and 1850.  While the rules of civility weren’t that different between the Regency and Victorian eras, they also were quite different.  It’s easy to assume that the earlier eras were more conservative, but often later eras become more restrictive, often as a backlash against earlier excesses, which can be seen in the Victorian era as well as in things like the homeschool movement of the late eighties through the early twenty-first century, for example.

Sensibilities. We often like to read about the plucky girl who defies social norms and strikes out on her own. I used the example of a woman who wants to be a doctor in the eighteenth century or a girl riding on the Pony Express. We see the Earl of Snobsbury who just wants to study the Egyptian beetle and forget about his title, but most of the time, that thing didn’t happen.  Yes, we like to read about exceptions to the rule, but when every book that comes out is that exception, we then risk “understanding” history through a warped lens.

I shared the example of the assassination of President McKinley and the subsequent execution of Leon Czolgosz–in the electric chair. More about that can be read in this BLOG POST. It would have been unrealistic for that not to be mentioned in a book where a main secondary character is the mayor of a major city and a book about an electrical scheme!

Later in that same series, rules of mourning became an issue. Because Queen Victoria died, I allowed myself a tiny bit of leeway that I otherwise wouldn’t have risked.  America, a daughter instead of a spouse, after her death, et cetera let me cut normal mourning in half for a daughter with a wedding date set (and a mother who insisted they go on with the wedding, of course).  Did I stretch too much?  Probably.  However, I made an attempt to show that they were cognizant of the situation and kept things simple because of that as well.

The Battle of San Jacinto.  Researching that changed everything.  Twenty minutes! I couldn’t believe it. However, that also gave me insight into Santa Anna’s men, and I learned that they were very poorly trained.  So, my character running AWAY when all the men went running wasn’t implausible. Instead of having to make him get turned around and lost, I was able to make him run because he was a coward.  Look, the other fit his character, too, but this one made the story richer.

At the time, I read stuff about Sam Houston and the Battle of San Jacinto. Then I moved onto learning about San Francisco, the voyages around Cape Horn, about Alta California, and the lifestyle of the Californios.  I read fiction written at the time and about the time if I can.  During all that time, I learned a whole lot about Juana Briones.

Dry cake– stale or just with no icing?

There are so many food differences that change everything when given half a chance.

Words— were they in use?  Did they mean the same thing?

If you want to know how to make those American biscuits, would you be asking for a receipt or a recipe?  Depends on what year you ask!

Pocket: sewn into a garment or something you tie on and hope you don’t lose?  (And I suspect now we know why some people call wallets “pocketbooks.”

Nice: this one has meant many things, beginning with ignorant or idiot

Cute:  it once meant “bowlegged” or quickwitted.  Two completely different things. It only changed around the 1830s to mean “attractive” in some way.

Keen: Eager or anxious to do something (slang) was in use by 1901

Peachy Keen?  Adding that adjective didn’t come until the fifties!

I don’t write a historical fiction scene without looking up if some word was in use at that time AND if it was used the way I’m using it.  Even the simplest ones can trip you up. And with words, there’s the other side.  Certain ones were in use… but have made a comeback. Snarky is one example.

How do we keep it all straight?

Well, books, libraries, experts…  It’s a jungle to wade through, isn’t it? On the other hand, we have it so much easier than people fifty years ago did. We have huge search engines at our fingertips.  We also have even more inaccurate information than ever before thanks to anyone being able to throw up their opinions–kind of like me with this podcast. 😉

Going back to Regency as an example, when I go try to look up something, HALF or more of all the search terms are going to give me Victorian replies.  I have to work down and down and down until I find the right thing.  Sometimes, even that isn’t enough

So, how does this all play out?  Well…

By the time I’ve finished a contemporary book, I can probably say I’ve usually done between twenty and forty hours of research on stuff–job skills, how a football play works, what songs are popular in what genres… that sort of stuff.

However, research for historical fiction can easily take well over two hundred. Every time I add up the hours for DRotH, I remember more and it goes up.  The last count was closer to 250 on that one.  The Madelines are taking me about a hundred hours these days because I did so much with the first two.

Previous Post: « Ready for the Great Stories from This Exciting Contest?
Next Post: Time to Spice Up Your Life—and Your Reading! »